An Assortment of Glassworks

Here's a roundup of things I have made recently.

First up, I made a squadron of sixteen little P-51 Mustangs, for a gathering of aviation photography friends. 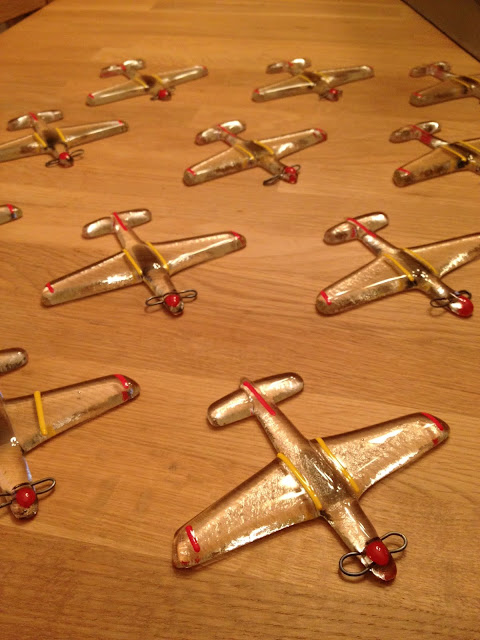 Then I made a balloon; this one is about seven or eight inches tall. I gave this to the balloon club as a door prize; I think Ronda won it. 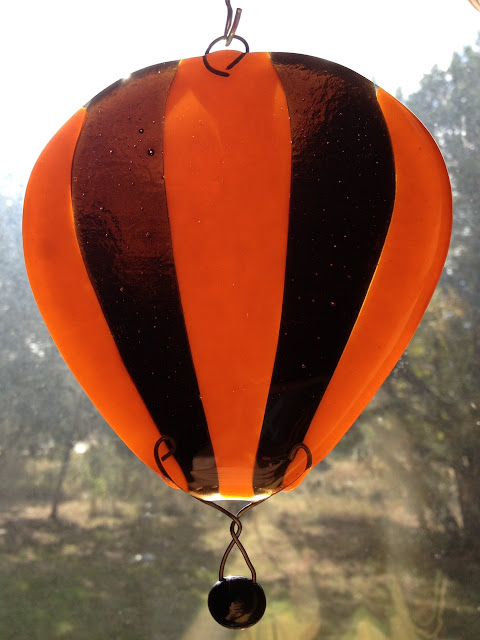 I made these four little 3" tall balloons for window or Christmas tree hanging. I later made five more and gave them as gifts. 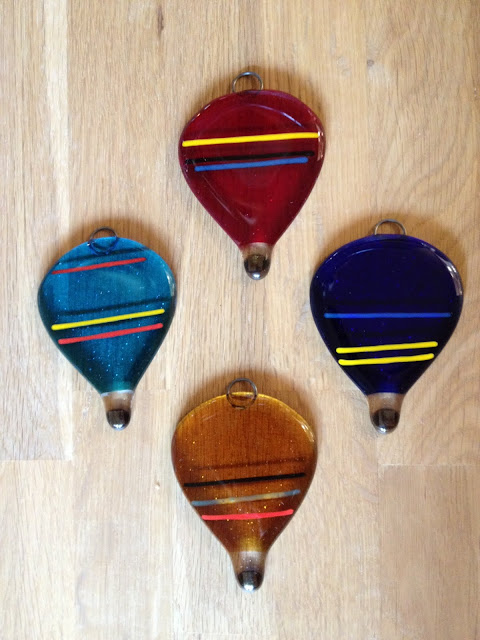 This was my first proper attempt at pattern bar designing. You make square bars and slice them up, then lay them out and fuse it together. The fusing part worked fine, but unfortunately it cracked while slumping. You can see the wavy line across the right hand side. 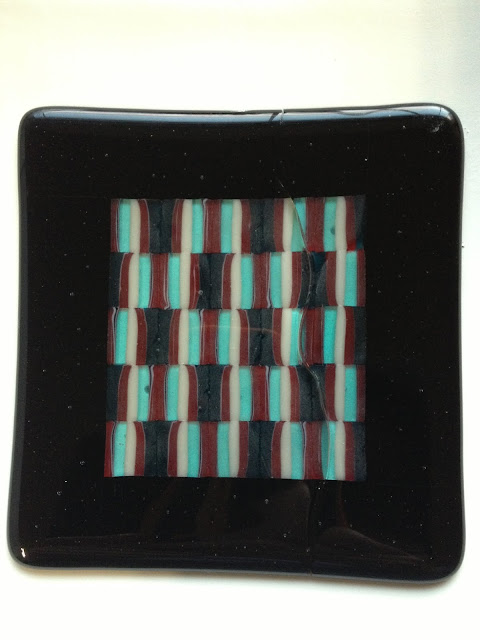 This little blue dish was the first pattern bar experiment. I deliberately slumped it off-centered; it ended up all wonky anyway so I built on that... 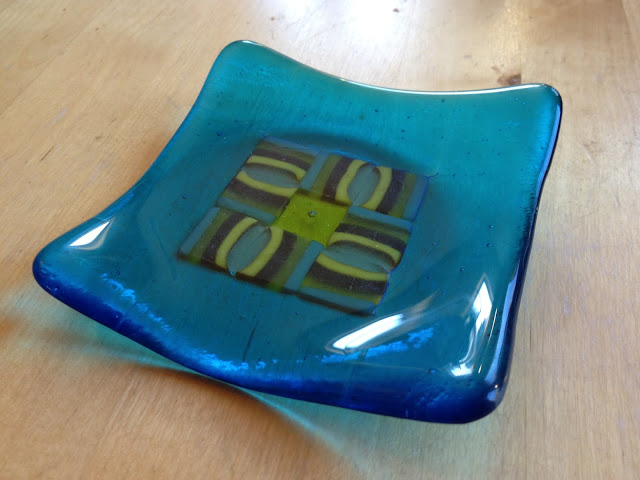 This one I made for friend Diane, who likes purple. 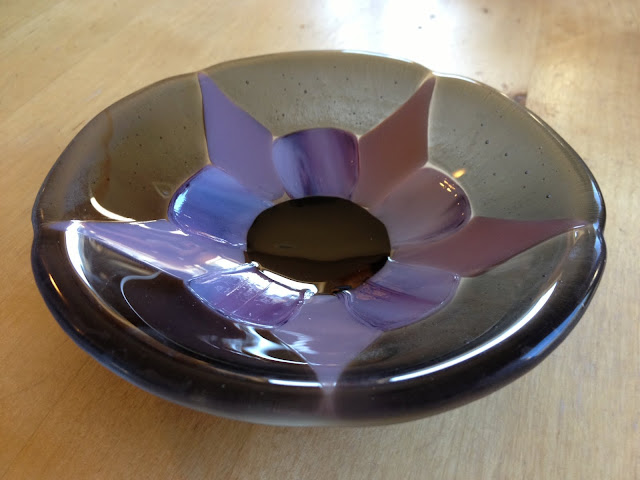 This is probably the best pattern bar result, unfortunately I put a flaw in here without realising. I will pay more attention to my construction next time. This annoys me. 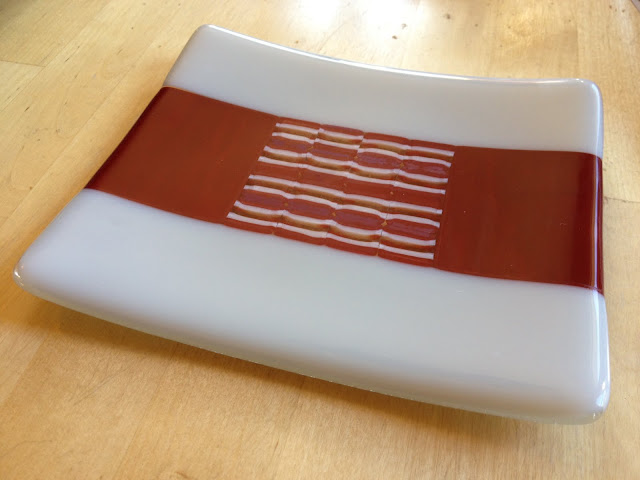 Alan wanted something to give to his friend Marla, so I made this little window hanger. 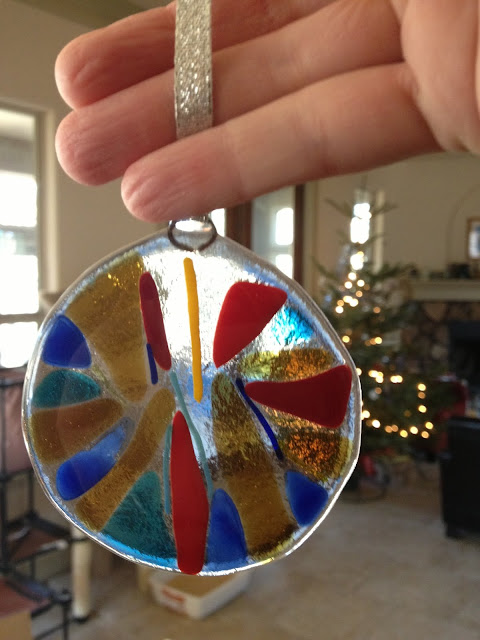 This one was for Doug and Carla. I don't know why the green glass ended up with the dark lines at the edges. Just the way glass reacts, I guess. 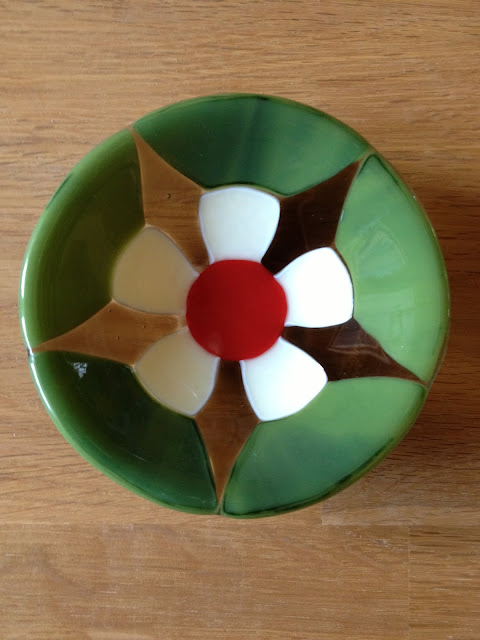 Friend Terri also likes purple, so she got this one. The stars are dichroic transfer decals but unfortunately a lot of the points bent over during fusing. Perhaps I waited too long before firing the piece and they dried out too much. 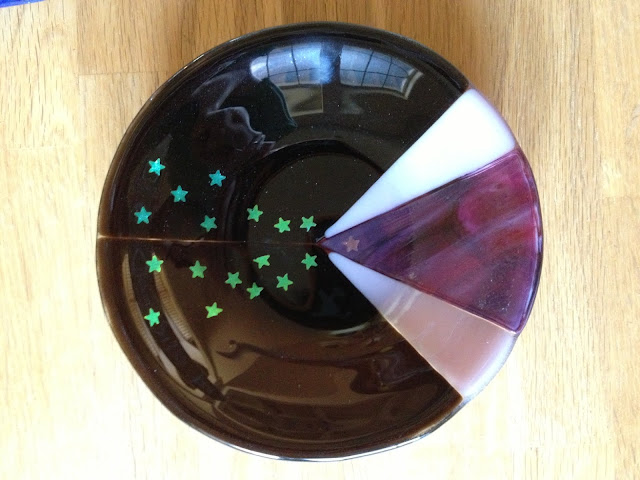 Marla apparently really loves glass, so Alan gave her this square dish, too. It is difficult to photograph the shape of these bowls, it is more elegantly shaped in real life than it looks here. The square mould I have has a nice gentle curve to it. 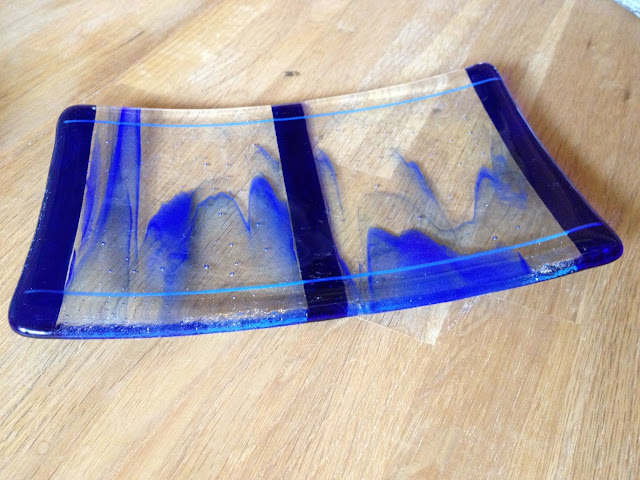 Finally, here's a bunch of them together. The little green bowl on the left did not slump very well; it has a very round bottom. I keep a marble in there now for extra randomness. The black and purple dish with the square middle is another slicing experiment; I made a casting which I didn't like, so I cut it into strips and reassembled them sideways, to get the pattern you see here. 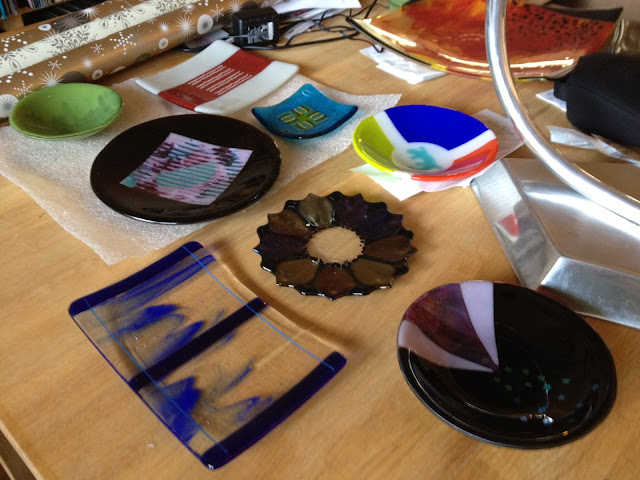 Alan finally got a Sunday that was warm and dry enough to do some brick cutting, so Bricks he did Cut. There's only two or three more rows of bricks to go before the dome is complete. First, he finished a half-row that was ready to be completed. 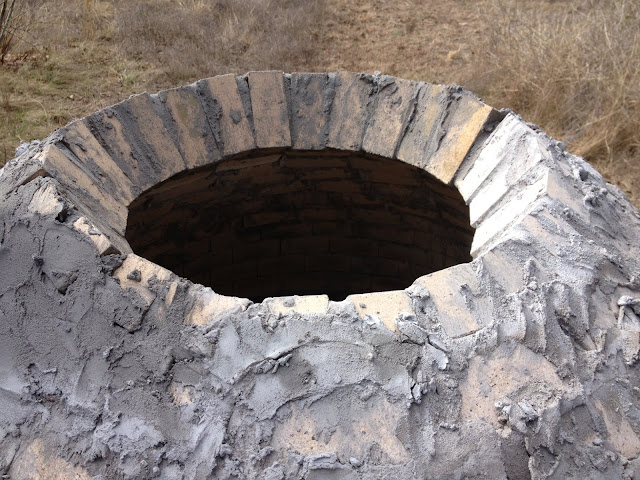 Then it was time for The Ball. This is a large inflatable exercise ball, that will support the last few bricks. The hole is small enough now that the ball sits in there just nicely. 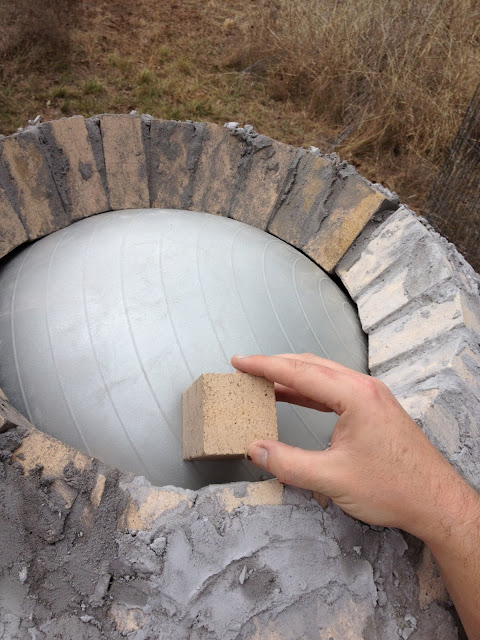 Progress moved on swiftly, until Alan ran out of fire cement - dammit! So we now have to wait until the fire cement shop opens tomorrow before Alan can finish this row... still, the end is in sight. 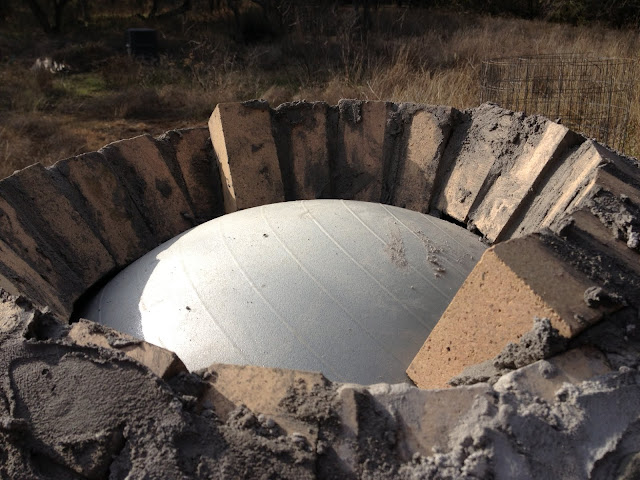 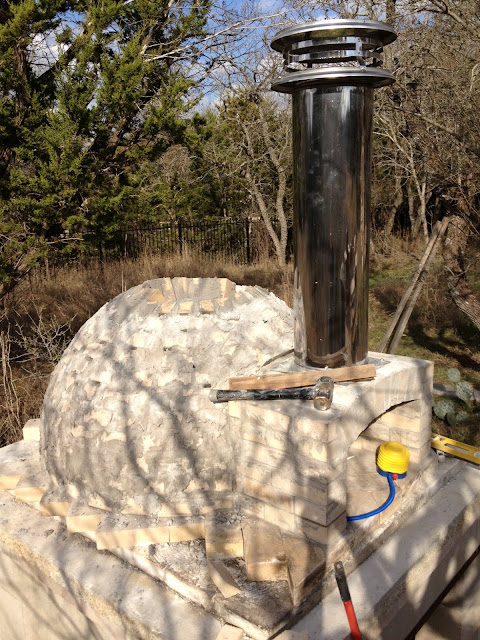 Here's Smokey, up a tree. He was trying to chase birds, and was most put out that I was scaring them all off. I earned a swat of the paw for that one. 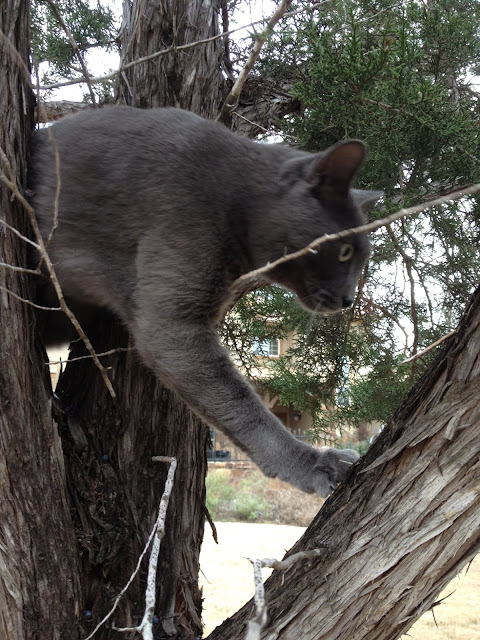 Sister Rookie is thriving at Tamzin's house as usual. She is mellowing out, like Smokey is doing, and is not as bitey as she used to be; she seems to like a bit of attention now. 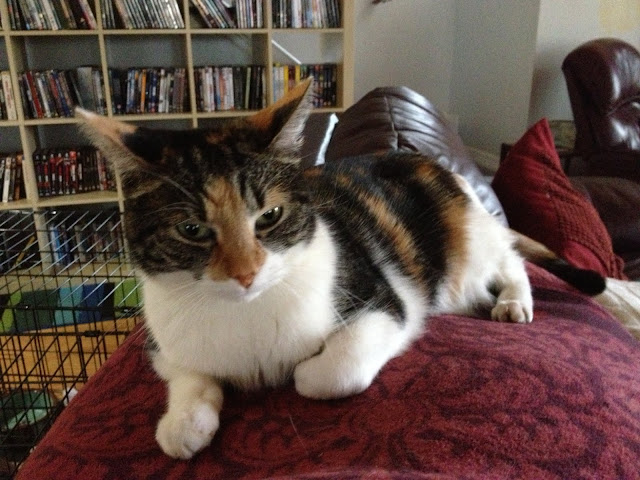 We haven't seen much of our little black stray, Snowman, recently. I think he has given up on us. Dee next door says she sees him eating her cat Patchy's food which is always available outside, so I guess he has moved on to easier pickings.

We had a couple of visits from the Gingers; mainly Dark Ginger who has a new collar, which tells us his real name is Carlos. This makes his brother (Light Ginger) Murphy - I knew one of them was Murphy but not which. He's not been by in a while though.

The deer were out in force the other morning. Here's one of them passing by the kitchen window. 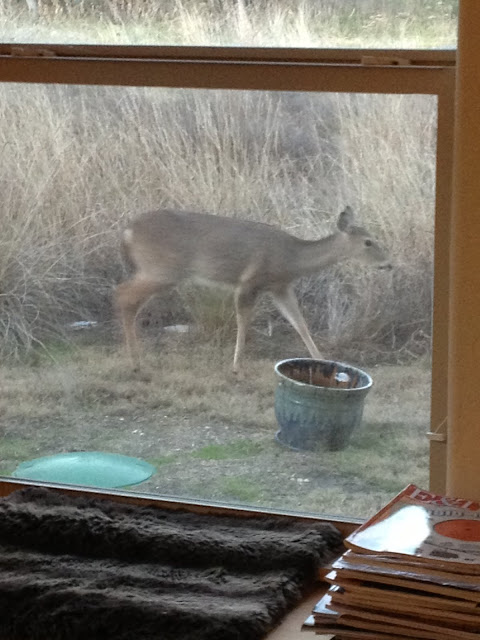 And back to Smokey again... He and Bandit used to both fit in this cat bed when they were young, with room to spare. Smokey has taken to sitting on the table in the sun room, so I took this old bed out of the garage the other day for him to have somewhere warm to sleep when I'm out. It seems to be a hit! 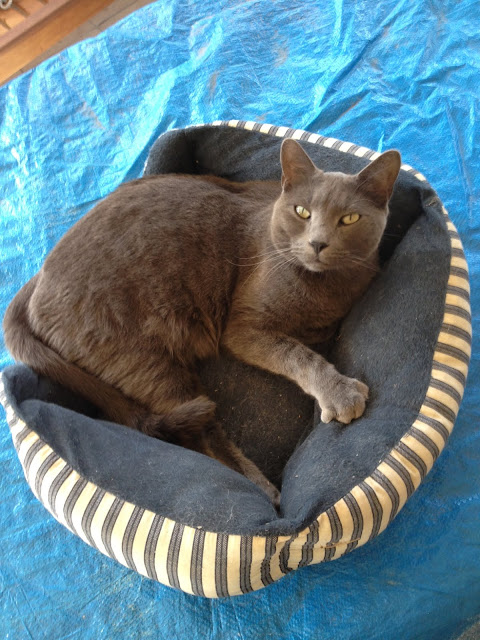