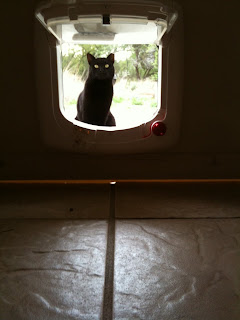 Who has now taken up station inside our sun room, presumably hoping for an evening meal as well as breakfast! 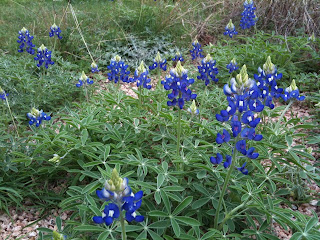 The bluebonnets are riz.
I wonder where the birdies iz?
The hummingbirds are tapping at the window, waiting for their feeder juice!
Posted by futurshox at 18:13 0 comments 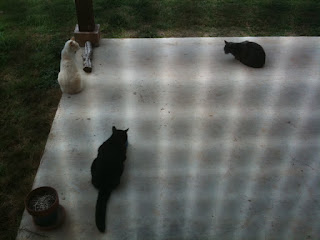 I know I only posted about Snowman yesterday, but he has been hanging around for months now.

So this morning, all three cats were hanging out together, when Smokey and Bandit wanted their breakfast.

And I could no longer ignore Snowman, so I gave him a bowl too... He's in the foreground; tail extended.

I should probably note that we asked the neighbourhood some time ago if Snowman belonged to anyone and nobody cane forward, so I am pretty sure he is a stray and I am not feeding someone else's cat!

As I type, he has completely finished the bowl. While he's not a thin cat, he must be a hungry one.

He is a wandering stray that lives in the neighbourhood. He is a wily and bold cat. He is friends with Bandit, and we have often seen them walking together, or just sitting in the back yard.

He also likes to eat, and is not shy about taking opportunities. Since Bandit showed him where her food was, he will slink into our kitchen and help himself, if the back door is open! On several occasions now, I have spied a black backside high-tailing it out of the house when I've come downstairs.

His ear is clipped as a marker; he must have been trapped and neutered at some point in his life.

And if you're wondering why we call him Snowman... well, the Bandit's best friend in the movie was Snowman the truck driver... and it seemed nicely ironic :-) 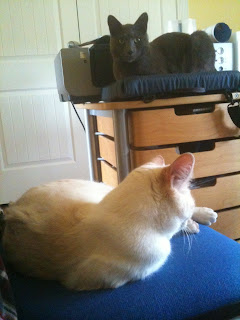 This morning, these two were due at the vet for their first annual checkup.

Cue much wailing and mewing since I wouldn't let them outside.

More wailing and yowling in the car. It really is amazing, the variety of noises these cats can produce.

At the vet, Bandit was not convinced but she allowed herself to be weighed and examined, before receiving the three vaccinations they both required.

Smokey, however, turned into a growling, hissing, ball of grey clawy fury whenever a vet or technician tried to get near him... We skipped the weighing and exam. It took three of them, a towel and a leash round his neck to hold him still for three of the fastest injections you ever saw.

The vets and techs all scarpered, while I calmed Smokey down and got him back in his box.

More mewing on the way home, although mainly resigned-sounding.

And now we are all in the house. But since the vet said I should keep them in today, more wailing is going on. They want Out! So I am besieged, while they make sure I know they are there.