This has been a long time in gestation, but I finally completed my glass tabletop.

Way back in November last year, I found this cool Singer sewing machine base at a local market. I think these things look fabulous, and this one works very well; the foot pedal turns the wheel easily with minimal squeaking. I thought I could use a piece of glass we had in the house as a top for it. Of course, that glass turned out to be half an inch too small to fit, so another plan was called for.

I figured I could make a piece of stained glass, and get a wooden surround made in order to support it and affix it to the base. So I designed the glass panel to use the same shapes as the ironwork has in the sides, and in the flywheel. The colours were chosen to match the rug and other furniture in our living room.

Somewhere along the way, friend Mark offered to build the wooden surround for me. Yay Mark! He has a great workshop and we were able to get it built in two separate nights. Here you can see we have cut the wood and it is clamped together. There is wood glue and biscuit joints holding it all together.

Here it is after sanding the whole thing, and Mark is affixing the support bars that will hold the glass. I bought two sheets of plate glass to make a sandwich; one on the bottom to counter any sagging that may occur in my stained glass, and one for the top to make a smooth surface.

Here Mark is checking a measurement before making the drill holes to attach the base. He did all the real woodwork, although I did make some biscuit joint holes and did a lot of sanding! Power tools, I love them.

This is the first time we put it all together! The wood is still very light in colour; it's probably still covered in dust at this point. I chose to use Walnut after seeing some of Mark's furniture he made, and Mark sent me home with a bottle of Tung oil to finish it with. It makes a beautifully deep finish in the wood.

And here's the finished product, shown with unfeasibly large pictures so you can get a good look at it!

I'm pretty happy with the final result. Actually I'm delighted! Many thanks go to Mark, without whose help this would not have been possible.

Gratuitous Smokey Cat pictures, of him doing what he does best. Sleeping. 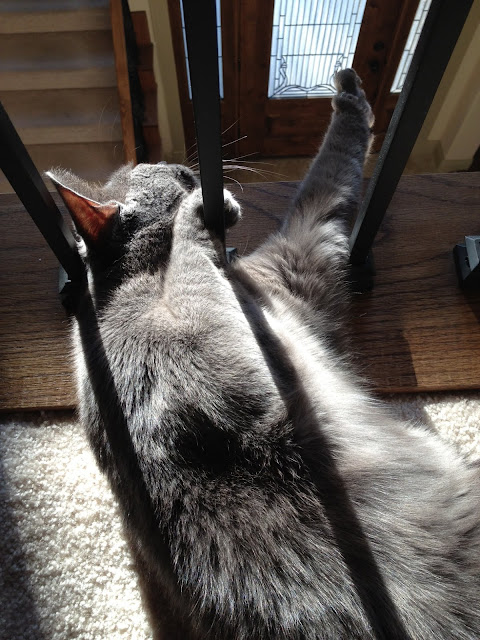 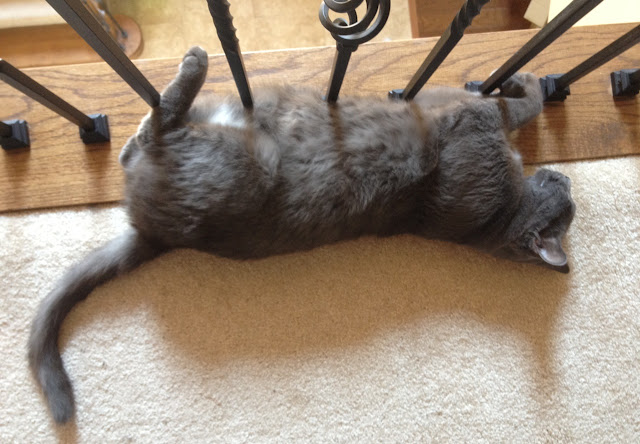 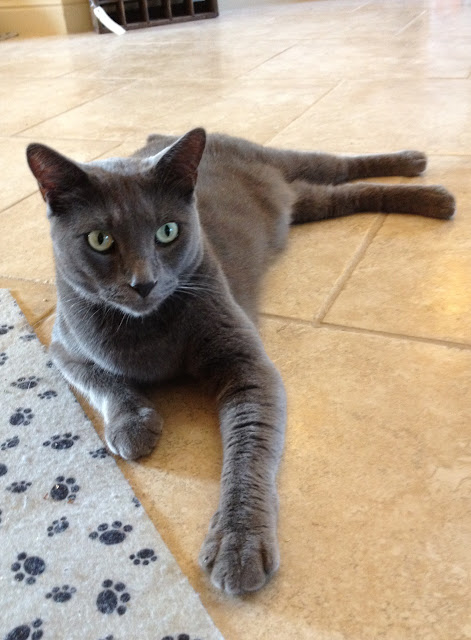 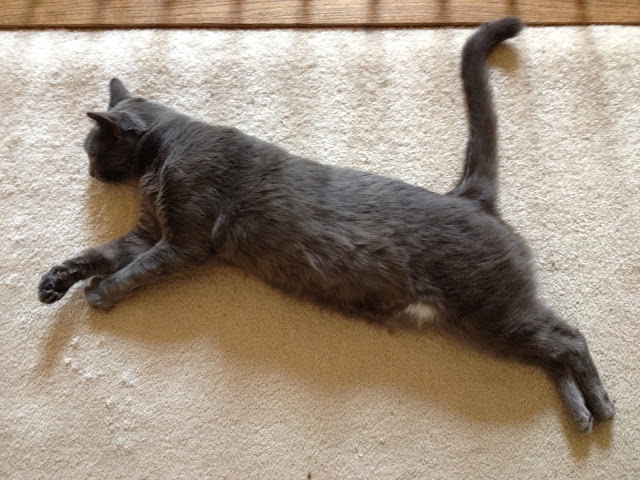 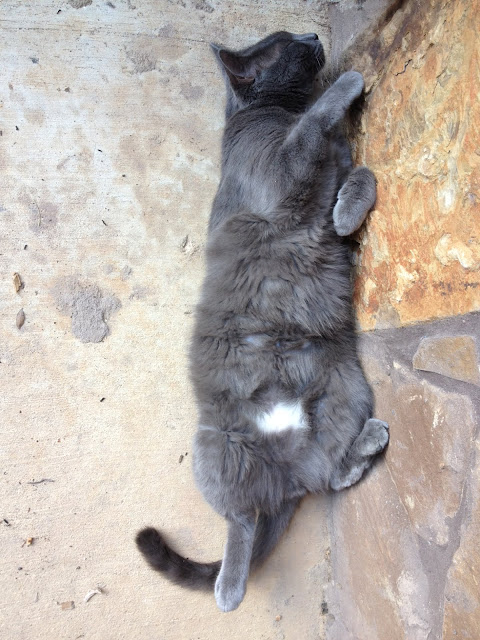 It's probably nine or ten months now since Alan decided to become vegan. And since his reasons made sense to me, and I wasn't about to cook two meals each night, I have largely followed suit. I thought I'd share some observations here.

If you're not sure what a vegan diet is, it means you don't eat any meat, fish, eggs, dairy or other animal products. Anything plant-based is OK, so vegetables, grains, beer (thank God!), wine and dark chocolate are fine.

So what were the reasons? Alan has spent the last few years getting more interested in diet and nutrition. He has encountered a lot of evidence that suggests a vegan diet helps in staving off chronic diseases such as heart disease, cancer and obesity - you know, the major complaints of Western society.

One such study is The China Study, in which scientists compared the Western diet which is heavy in meat and dairy consumption, with that of rural China in which most people rarely, if ever, eat meat or animal products. The Chinese had a vastly reduced number of disease cases. There are plenty of other studies around if you care to know more.

There's also the fact that raising animals for food consumes many more resources than simply growing crops. Animals have to eat too, so you're raising food for them which could be eaten by humans. The food crisis on this planet is not getting any better, and the population keeps increasing. You don't have to go completely vegan to help with this one; if everyone ate a vegan meal twice a week, that would be almost a third less resources needed to keep livestock.

And I'll be honest, when we first got our cats, and I saw how characterful they were, I was less happy about eating animals even then. Why _do_ we love our cats and dogs, but treat farm animals as commodities? Pigs are meant to be one of the most intelligent animals around, and I am not sure I feel right about eating them. (I know; no more bacon.) That said, I recognise there is a tricky balance to keep. If everyone stopped eating meat, there would be no need to keep farm animals, and I don't want to see species in danger of extinction. Although the chances of that happening to chickens and cows is pretty unlikely.

So before you all think we eat nothing but lettuce, let me give you an idea of some meals. We love Indian food, which is good because the Indian people have been vegans for centuries. The Chinese and Thai folks are not bad at it either.

We eat toast for breakfast, with jam and vegan butter-like spread. Alan loves his peanut butter. Or we might have a smoothie made with frozen fruit and cranberry juice. Later on, we always enjoy some yogurt after dinner - soy or coconut yogurt saves the day here, and they are good. So is coconut ice cream!

There are plenty of meat substitute products around. Most people are probably familiar with tofu, which is so versatile and can be used in many ways. Tempeh is a fermented tofu which sounds weird but it's actually very good. It is denser in texture and can be crumbled into mince, for example. Seitan is basically wheat gluten and does a pretty good job in stews; it has a very meaty texture - Alan reckons too much so! There's sausages and chicken tenders and meatball substitutes available. We don't actually use a lot in our main cooking but we do grill things.

Eating out can be interesting. Veggie burgers are a common choice. The main thing to watch is that they love to put cheese into everything, even salads. The menu options do become much more limited, but we here in Austin are blessed with a good variety of vegetarian/vegan eating establishments. VegAustin has probably the most comprehensive list of eating spots in town.

We mostly eat at home though. We just do; this didn't change with our diet. Some of my favourite dinners include the following. I've linked these recipes where I can; some of these are only stored in my recipe app:

Beet, squash and radish Moroccan stew - this is a rich and hearty meal; pair it with cous cous for extra filling.

Bok Choy, Edamame, Cashew and Orange Rice - Sweet and crunchy and tart all in one.

Vegetable Jambalaya - with some Chik'n Strips thrown in for meat substitute.

Fennel & Butternut Squash Risotto - I love this one, the fennel has a nice delicate flavour, and it's an excuse to put wine in your cooking ;-)

Kamut pilaf with cashews and apricots - Kamut is an ancient grain, you soak it for eight hours and then cook it like rice.

Mexican Yellow Rice and Black Beans - this is a nice easy one and very tasty.

Miso-Ginger Wild Rice with Carrots and Cabbage - I have yet to perfect this one; the miso makes it tasty but it's easy to overdo it.

Quinoa with Cauliflower, Cranberries and Pine Nuts - Pretty much as it sounds.


One thing that has helped my culinary skills is Greenling, a local company who delivers fresh fruit and vegetables to your door. They get the produce from local farms and you receive whatever is in season. Thankfully, they also supply a recipe idea list with each delivery. We have had all kinds of things from them, some that I didn't know existed (Black radishes? Rainbow turnips? Who knew!) Their stuff is always very tasty and has helped to broaden my horizons in a vegan world.

After all this time, how is it going? So far, I miss cheese. I love cheese. Not that I ever ate a huge amount, but I have been known to slip occasionally. And once or twice I have been at someone's house who has cooked for me, and I did not want to dishonour them by refusing to eat, when they didn't know I was vegan. On the whole though, I am enjoying the diet. I feel better on it, and so does Alan. Neither of us really misses meat all that much. We still grill - Alan loves to grill - but it's veggie burgers or vegan sausages.

I want to try making some raw food again - we did a raw food diet a couple of years ago but gave it up as you have to prepare meals three days in advance, with all the soaking of grains etc. I couldn't cope with that level of prepare-in-advance. But there are some great recipes for crackers and granola and snacky items made with raw grains and fruit, which would work well for us.

So there you go; I hope this explains a few things, and maybe helps the next new vegan who might find this and is wondering what to eat.