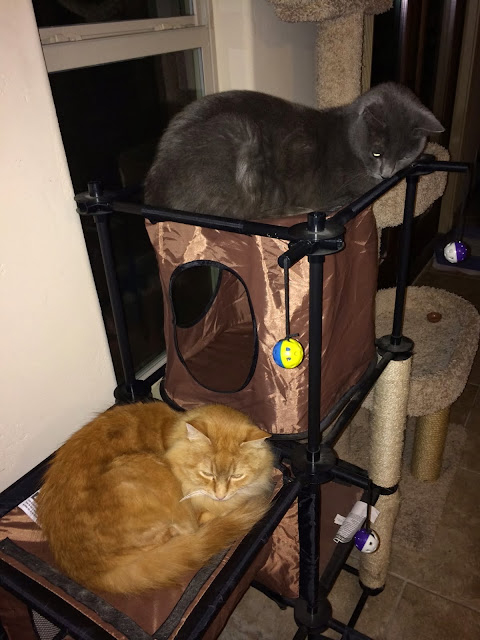 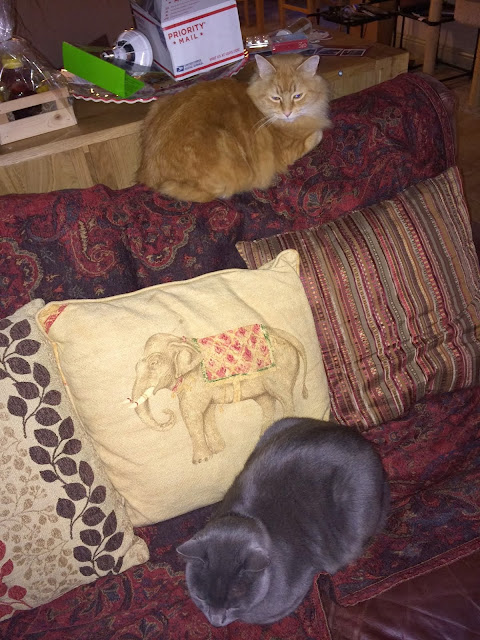 Here's Smokey, all sleepy and spark out. 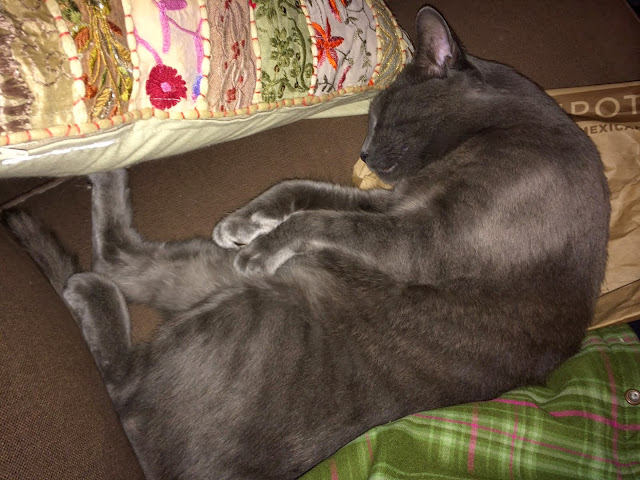 He even chose to ignore the fact that Sunshine jumped right up next to him. Usually that would be greeted with growling. 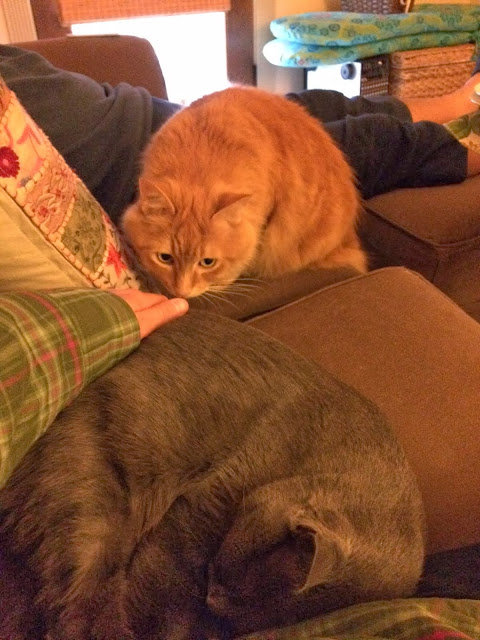 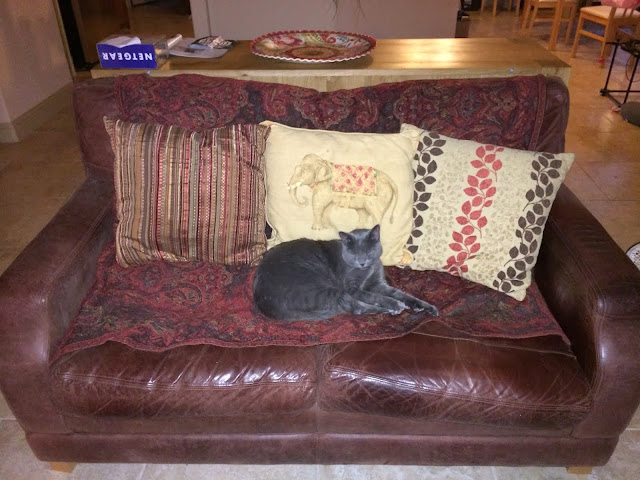 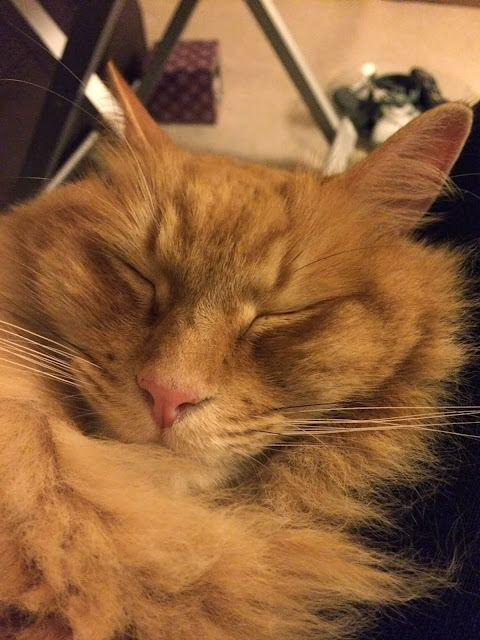 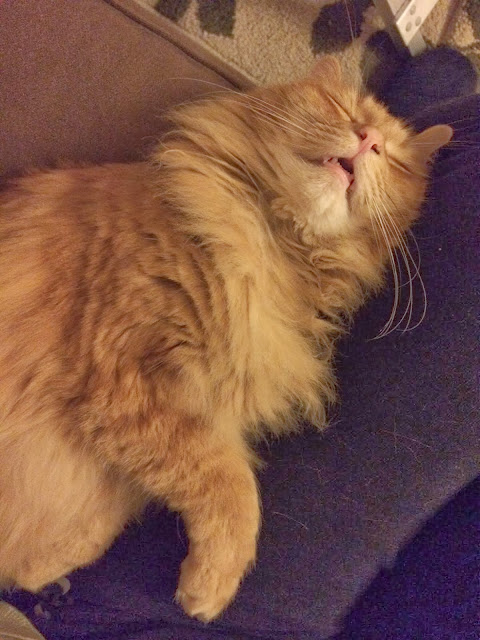 This behaviour seems to intensify when the weather is cold and rainy out... I think they like the warmth :-)

And so it was on the final Monday of my UK trip, I went to the train station with my Dad, where we both boarded a train bound for London. He had a meeting to attend near Gloucester Road, which was close to the Museum area. My flight was not until early Tuesday morning. It would normally be my plan to stay at a hotel in Heathrow the night before, but friend Andrew had invited me to stay with him instead. So I had a few hours to spend in London before meeting him. I chose to spend those hours in the Victoria and Albert Museum.

I bade farewell to my Dad a couple of streets away from the museum; he went to his meeting and I went to meet some culture. The big London museums are awesome and the V&A is a wonderful place. It's filled with all kinds of art and architecture from all around the world. Let's have a look at some.

Here's the entrance to the V&A.

One of the main galleries with various stoneworks inside.

I'm standing on an upstairs walkway which opens out in four directions. Here you can see a clock in one of the archways. To the right is part of a fabulous glass sculpture, about ten feet tall, which hangs over the reception desk on the ground floor, below. It's a bit dusty... I suppose nobody dares clean that amount of fragile glass!

Another view looks towards this ironwork screen which used to be part of a church. It is all hand made and painted and is thoroughly beautiful.

Here's a close up of the two centre panels. I love the lightness of design in this.

The screen leads into an entire gallery of wrought iron fences, screens and panels.

Further down the gallery, at a meeting of ways, which open into this rotunda. An artist has placed flattened brass instruments at ceiling/floor height as a sculpture.

Downstairs, there are many galleries of historic artifacts. I love the intricate work of this door.

And the solidity of this one.

No museum of historical artifacts would be complete without a suit of armour.

I'm not sure of this was a screen or furniture, but the woodwork was magnificent.

There were two enormous halls, filled with major statuary and works. Some are replicas, others are not, but even the replicas are old. Take a look at the bottom left of this image; you can see some sarcophagus-type coffins there. The figures laid on top are life-size, to give you an idea of scale. The column on the right is huge.

At the end of the gallery, up a flight of stairs, there's a small window through which you can peer out. I was not expecting to see more above me, but the ceilings of these huge galleries are suspended below the original glass ceilings which are under restoration.

Even the ironwork of the building is beautiful.

I reluctantly left the V&A after four or five hours slowly digesting its delights (including a very nice sandwich in their extensive restaurant area). I indulged in a ride on the Heathrow Express again back to the airport, and found my way to Terminal 5. Here I met up with Andrew, who took me back to his place where I spent a very pleasant evening with his family, before he took me back to Heathrow in the morning, and I got my flight home.

That flight was entertaining; I'd managed to book the same flight as friend Tamzin, who had also been in the UK. So we depleted the aeroplane's wine fridge and kept the stewards entertained ;-) Thus ends the Tour of the UK 2013. I hope you've enjoyed the ride.

Nympsfield is to the south of Nailsworth, on a hill that overlooks Stroud from the south side. There is a gliding airfield on top, whose inhabitants I used to regularly watch flying around in the distance, from my school. There's also a fabulous view of the Severn estuary, but we would not see any of that today, as it was grey and cold.

However, the other thing Nympsfield boasts is a very good pub! We made the trip over there for a Proper British Sunday Lunch.

Here it is, the Rose and Crown.

As you can see, it's a big building. It gets very busy with walkers, pilots and anyone that likes good food. We enjoyed a lovely meal in there.

A few other views of the village.. Here's a nice place.

Every village needs its phone box and post box.

Finally, here's a good honest solid Cotswold stone bus shelter. They don't make them like this any more...

On my penultimate day in Gloucestershire, our gang all met in Stroud, in order to get a coffee and visit the market. Stroud is the focal point of the local area, and the point at which all of the Five Valleys meet. The hills peter out into lowlands; west of Stroud lies the floodplain of the River Severn.

On the way to Stroud, it was a cold morning and there was snow on the hills. The roads were clear, at least.

We arrived, parked, and got that coffee, before wandering around a little. There's a few nice buildings in town, and (being honest) a lot of very ordinary ones. This first nice one is the Subscription Rooms, which is basically the Town Hall. Known locally as the 'Sub rooms', it was built in 1833 by public subscription and is used for theatre, art exhibitions and dances in the ballroom upstairs.

This is the side of what is now the TSB Bank. It has the same Regency architecture as the Sub rooms.

Facing the TSB is the Nat West Bank. Stroud is a town of banks and shoe shops, for some reason.

This clock tower stands almost opposite the Sub rooms and splits the road into a one-way system around the core of the town. Just beyond it you can see some rare beasties - red phone boxes!

We took a wander around Stroud market. My visit was during the height of the horse meat scandal; it was found that certain processed meat products such as burgers had high percentages of horse meat in them. Here's the sign by the troutmonger's stall.

We repaired for lunch in a pub on the edge of town, before heading into the Stroud Museum. Somehow I have managed to grow up in this town without having once ever visited the place, so it was time to rectify the situation. It's located next to the leisure centre in some nice parkland, and houses a collection that showcases the history of the local area, with a large emphasis on how local people used to live.

Here's a cooking range with various pots and pans.

There was a large section about brewing. These are some of the tools and vessels used by the breweries to make and distribute their wares.

Stroud itself was founded on the woollen industry in older times. The town's coat of arms features red squares on a green background, with a white wavy line running diagonally through the middle. The squares represent the red cloth laid onto the green hillsides to dry, while the wavy line represents the rivers. The red cloth was used to make soldiers' uniforms and later on was used on pool tables. The Museum has some examples of the uniforms and various clothworking tools.

Here is a lawnmower of the design created by Edwin Budding, a Stroud engineer. Next to it is a cloth mill. Budding saw the blade on the cloth mill that sheared off the fuzzy bits, making the cloth smooth, and realised it could be used on grass. He also invented the adjustable spanner.

After our visit to Stroud, we went back via the village of Bisley. It lies on the hilltops, about five miles from Brownshill, and was a frequent haunt for me on my bicycle as a child. One of my favourite places in the area is the Bisley Wells. They are situated on a side street in the middle of the village. At the top of the street, there is this monument to the local blacksmith.

Walking past this, we find the wells. Water springs from the hillside into these troughs, at first.

The troughs channel the water further down the hill.

These are the wells proper. Aren't they beautiful? They have been here since forever. They get decorated with flowers on Ascension Day in a Well Dressing ceremony. If you climb the hill behind the wells here, you'll find there is a church on top.

Another view, showing the permanently-wet ground. That iron grate has been there since I was a kid; I wonder how many things have been lost down it...

A close up of one of the well heads. The ancient Cotswold stone shows plenty of moss and lichen growth.

In which we find Sunshine is climbing a tree, in pursuit of some unseen creature which was capturing her attention... 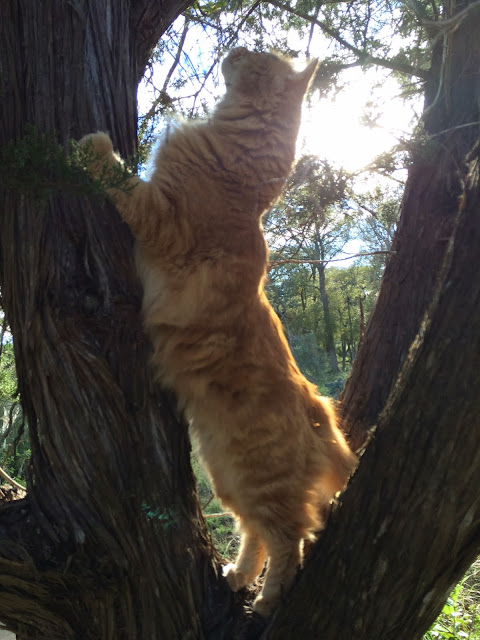 While Smokey is taking a snooze, leaning on my leg; a rare occurrence! He usually likes to be nearby, but maybe it's getting cool enough now that he wants some extra warmth? Who knows. I'm not complaining :-) 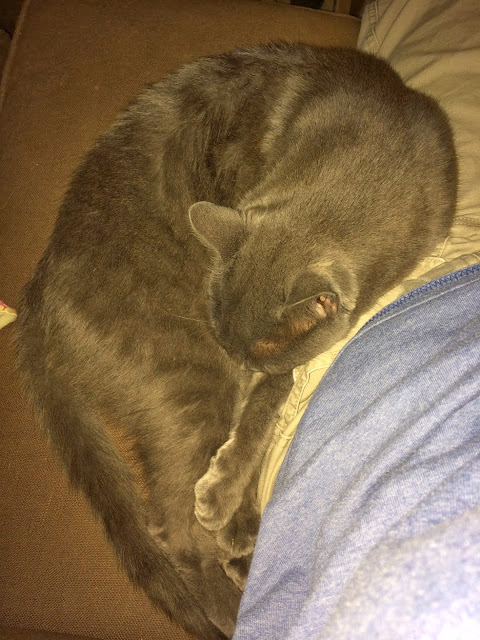 Smokey discovers Sunshine is outside. 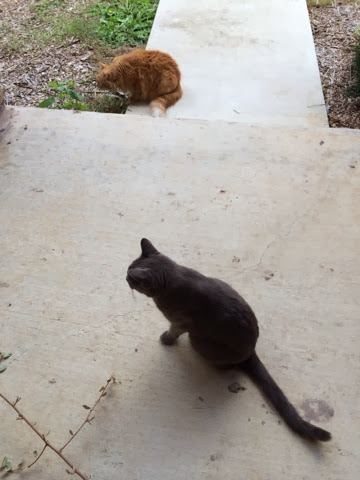 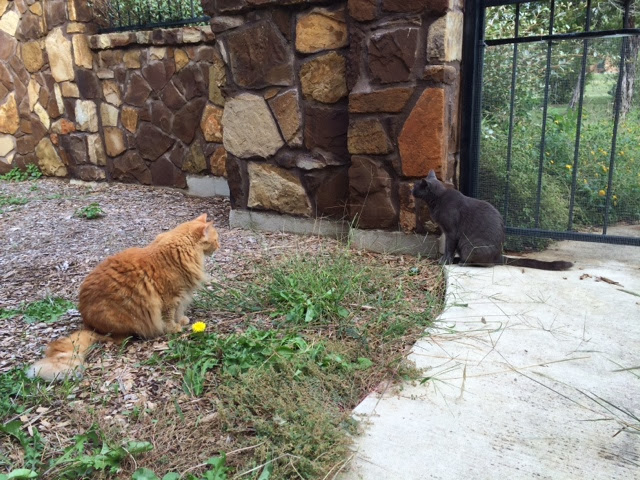 As soon as Smokey's back is turned, she jumps onto the wall, following him. 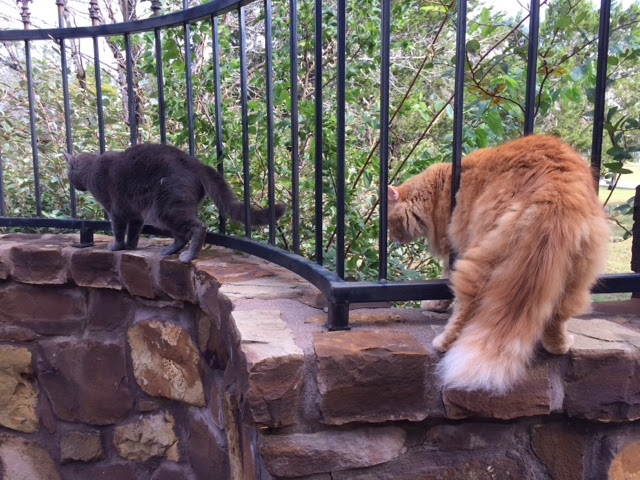 Smokey turns around. "WHAT?" 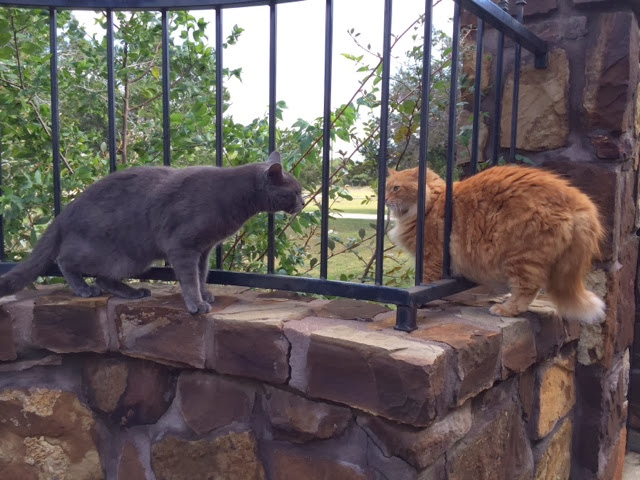 "Seriously, what's with the all this following me about?!" 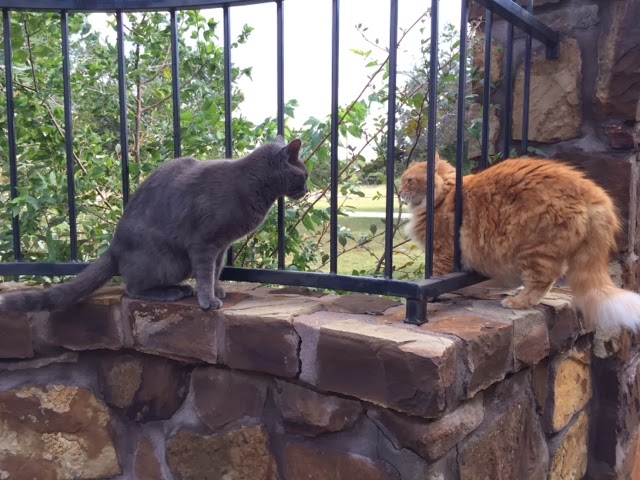 Then Smokey turned to me, giving me his best "what did I do to deserve this?" look... 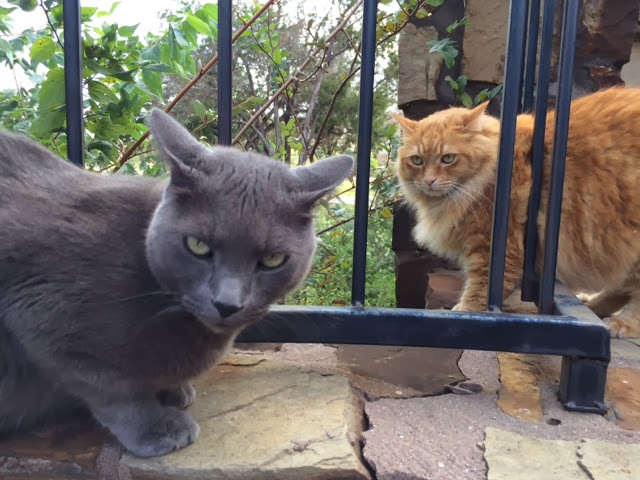 Let's see how these two are doing. Sunshine has been with us for several months now, and both cats are finally getting used to each others' presence, even if they don't like it.

This was a month or two ago. There was mutual growling going on here. 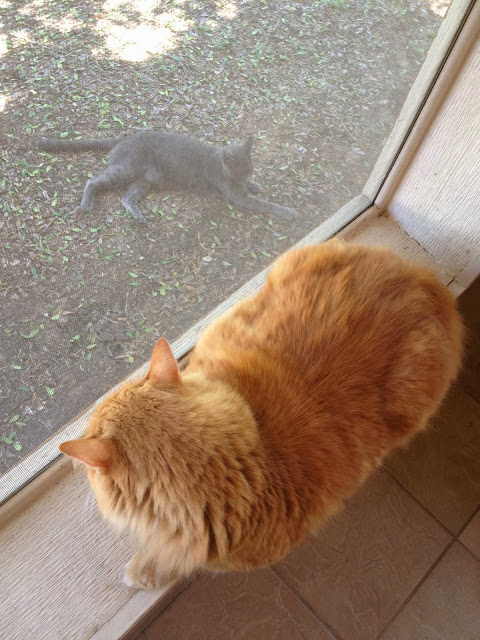 A couple of weeks ago, with Smokey asserting his position. Sunshine was just sitting there. 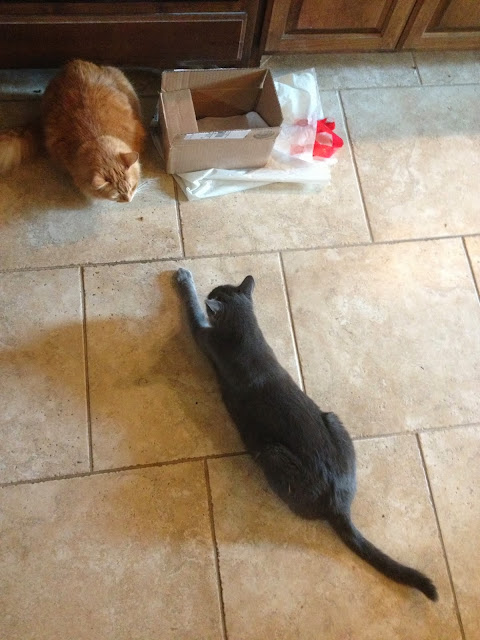 They're using the same sleeping spots these days, although not at the same time. Sunshine here had the temerity to get onto Smokey's tower, and you can see the look he is giving her! However, both cats settled down for a snooze shortly afterwards. 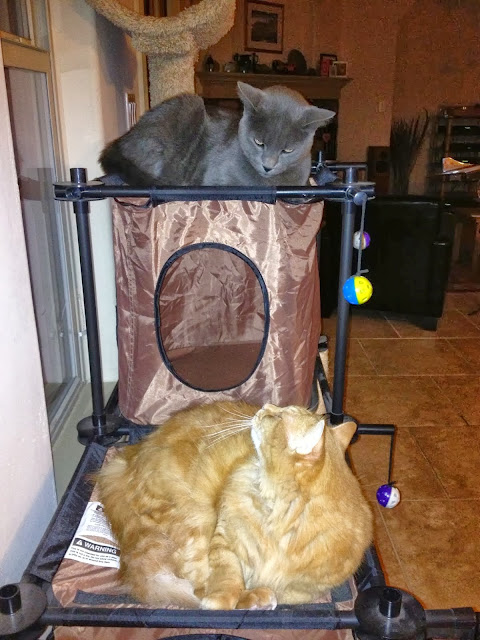 The other day, I took my computer into the sun room to work for a while. I ended up being accompanied by both cats... Smokey sat inside for an hour or so which was lovely. 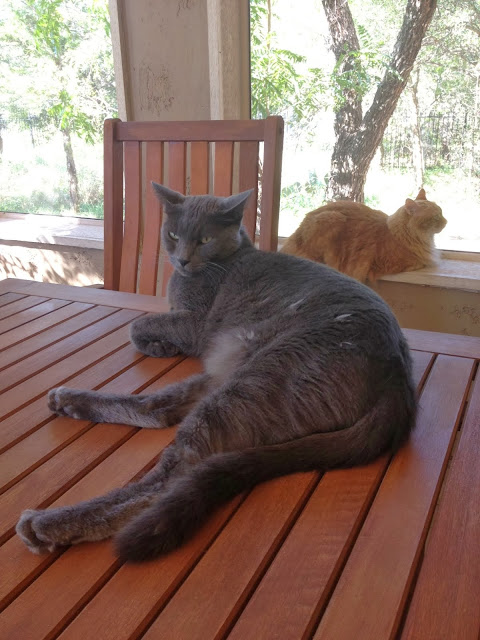 Meanwhile, Smokey is sleeping on the guest bed again. He's spent all summer in the sink, which is cooler, but now the heat is going away, he wants his comfort. 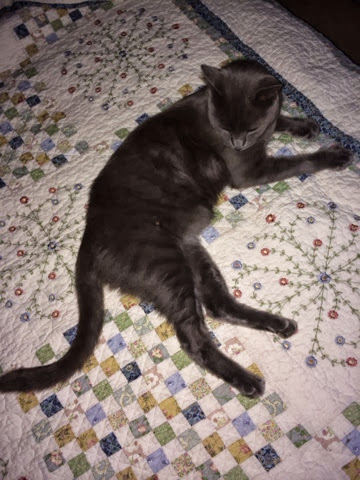 And Sunshine is getting a taste of the outdoors. She loves to roam the front courtyard. She is telling me all about what she can see from the top of the wall, here. 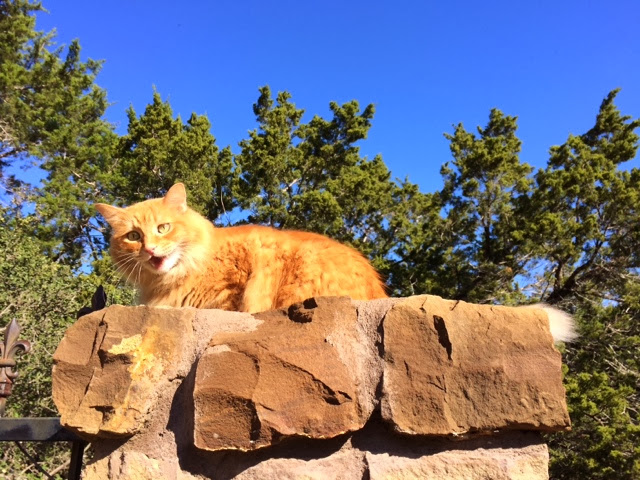