Had a little too much excitement this weekend. There's a couple of empty lots across from us, and on one of them, workers have been clearing the site in preparation for building a house.

They shredded all the trees and built a fire. We're not in a burn ban right now. Apparently they had a permit to burn due to having a digger on site, even though there was no water source. However, the wet spring we have had has quickly given way to warm weather, and everything is getting pretty dry again, already. They had been burning stuff on this site for a few days, since Wednesday or so.

On Saturday morning, they left the fire unattended. Our neighbour across the street, Jeff, came home to find the fire much bigger than he remembered, with some very brown smoke. He called 911 and got the fire department out, who spent most of the morning combating what had quickly become quite a large grass fire.

We returned maybe an hour after this all happened, to find fire trucks and smoke... 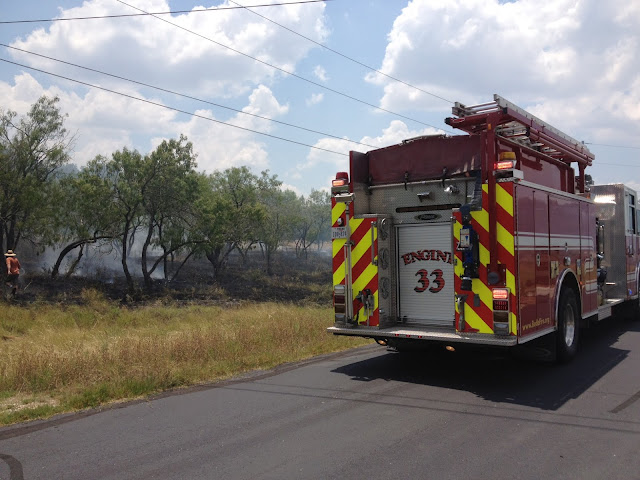 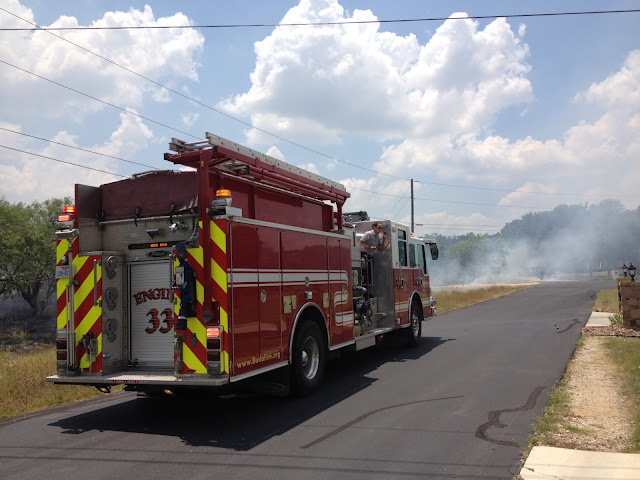 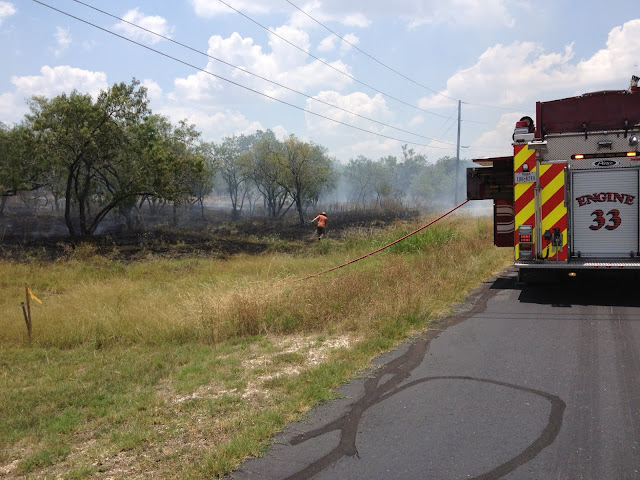 Jeff and I spent a good chunk of the afternoon putting out little smouldering patches, after the fire trucks left. I assume they wouldn't have left if they didn't think it was under control, but we wanted to be sure! They did say it might take a day or two to completely die out.

The next morning, there were still a few little bits smoking away. It's amazing how much heat is retained in the ground; you can feel it through your shoes. The bottom left of this picture shows a bit of smoke (easier to see when it's moving) and you can see how scorched-earth the whole site was. The mesquite trees were all looking very brown after getting heat damaged, too. 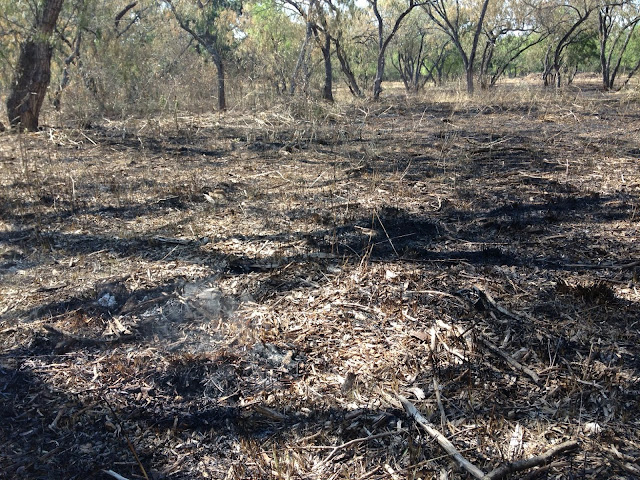 We were very lucky that the greener grass on Jeff's land, and the other side, seemed to help contain the fire. He was running his sprinklers, and has made liberal use of the garden hose, too. In fact loads of neighbours were out with hoses and buckets during the fire.

The moral of this story is - be careful with fire! Respect the dry conditions. And don't leave it unattended. Thank you Buda Fire Department for putting it out!

Update
It is Tuesday now, and we are still putting out hot spots that keep popping up, smoking and smouldering. There is still heat in the ground, I think, and who knows what is going on underground. We are keeping our eyes peeled...

Email ThisBlogThis!Share to TwitterShare to FacebookShare to Pinterest
Labels: random

I found this little guy in the sun room yesterday, minus his tail, clinging on near the top of one of the window screens. I took him outside and released him into the grass.

Today he is back in the sun room, on the floor this time. I wonder if he had help returning...? I do wish my iPhone had a closer focusing distance....

I spent a few minutes of quality time with Smokey, in the garden this morning. He was following me around...

This is my Redbud tree. I am guarding it. 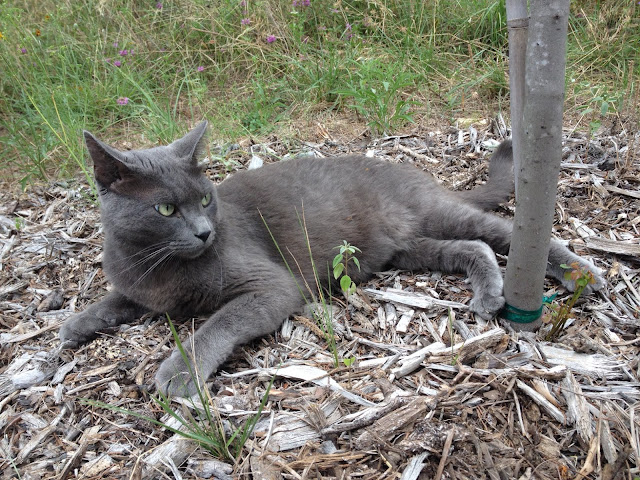 All our Persimmon trees have a monster crop of fruit this year. I am not sure if they are edible or not; at least, I have never seen our trees produce orange coloured fruit, only green ones like this that fall to the ground sooner than you expect. 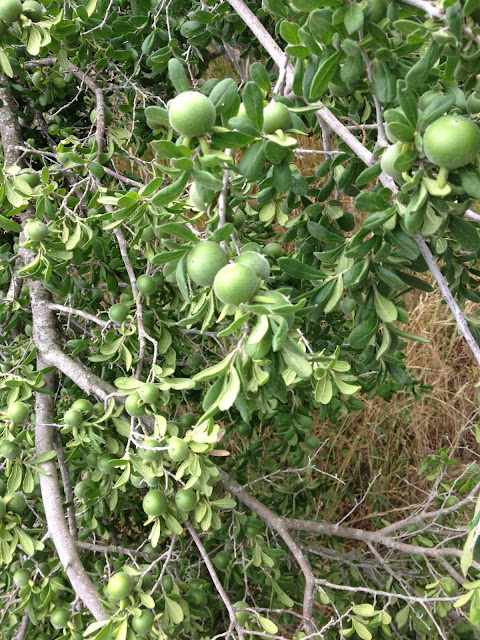 Smokey is investigating around the end of the Persimmon... it is bowed over with the weight of all the fruit. 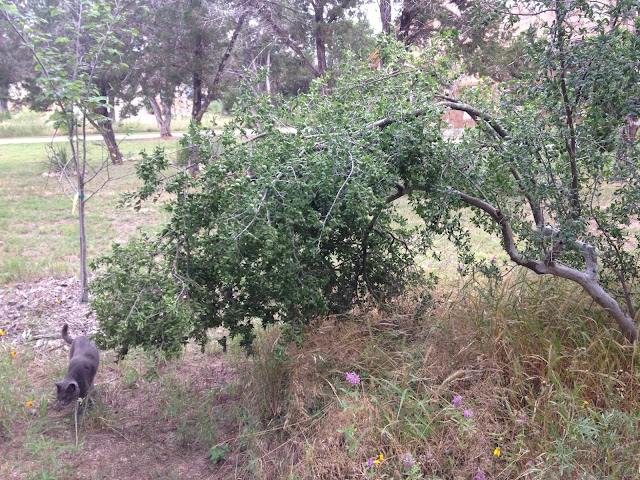 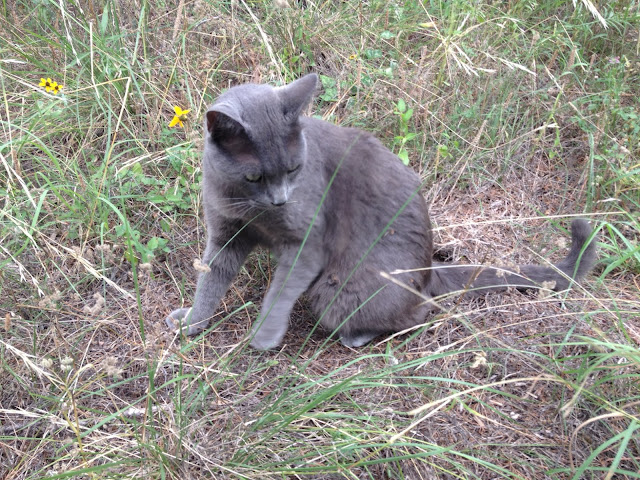 I'm just going to sit here and play with the long grass. 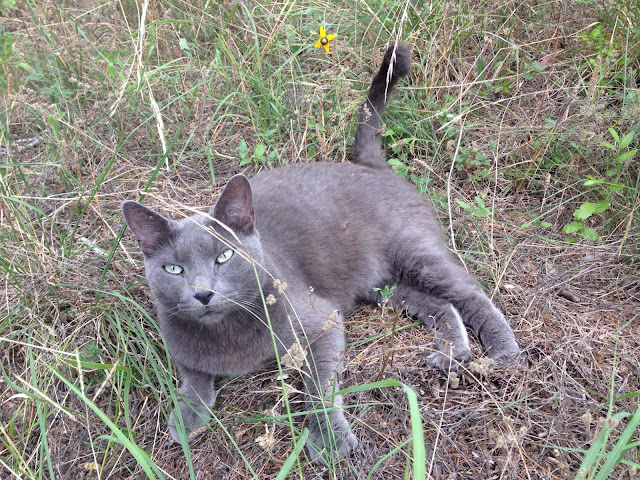 Just sitting in a shady spot. 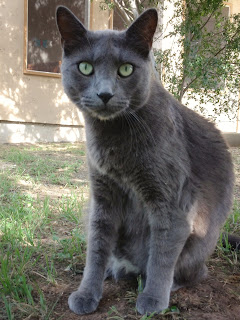