Spring is blooming here in Central Texas, and this year our back yard is filled to profusion with bluebonnets. Next door's meadow is a carpet of blue, too. The unusually wet last couple of months have brought them out in quantity; this is the best display we have had since we moved in. 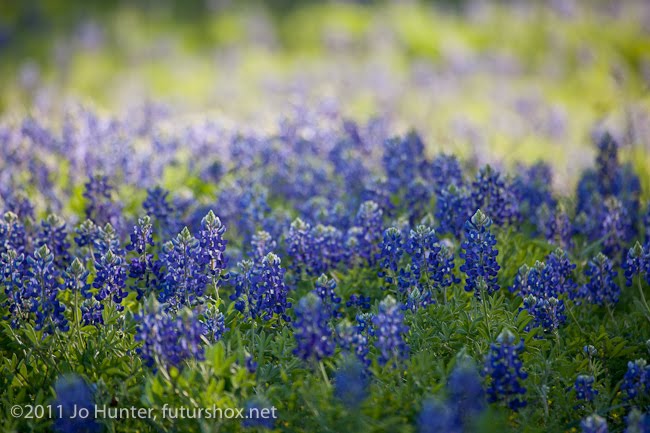 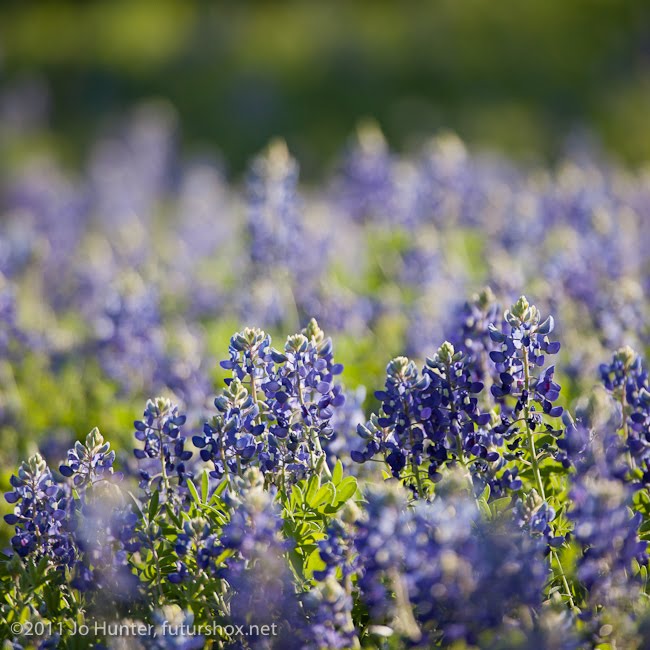 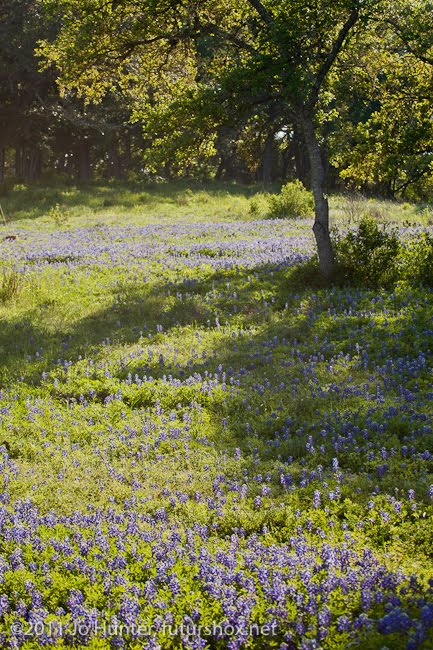 Gratuitous Smokey Cat picture, since he was sitting so nicely :-) 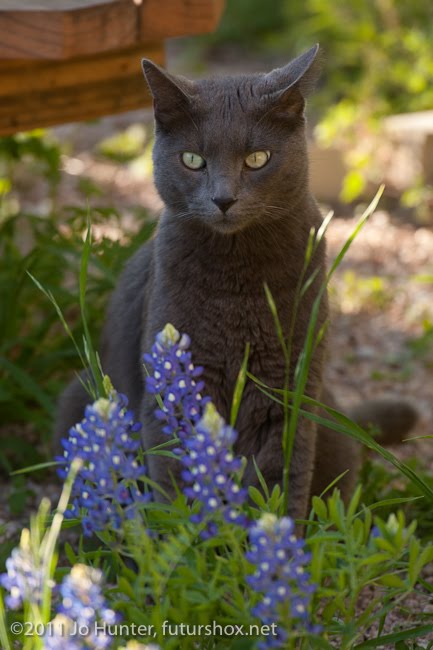 We decided to get a new garden shed, to store all the lawn mowers/grass hoovers, strimmers and associated garden-based clutter that seems to have overwhelmed our garage. We'd like to actually keep parking vehicles in there.

So the nice folks at Sheds And More came over and did the honours. It is 8x10 feet and made with Hardie siding, so it should last longer than a wooden shed. Hardie is a compressed concrete-based sheet that is formed into various shapes; the siding on this shed is formed to look like woodgrain, and it does a passable job - once it's painted, you don't really notice. 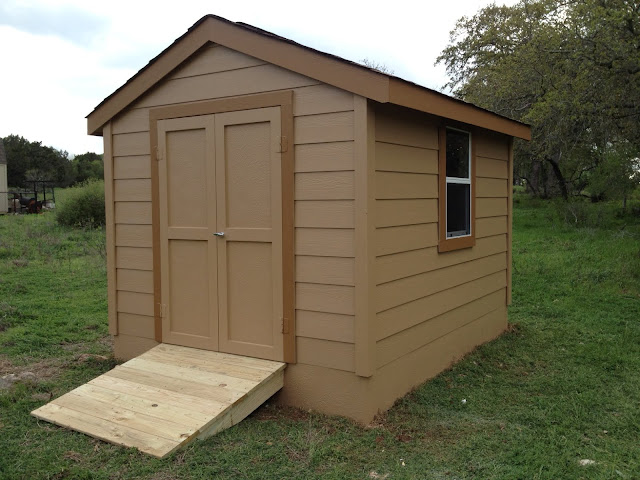 Of course, I couldn't let the opportunity pass by for a bit of timelapse photography. I asked the builders if they minded some cameras and they didn't mind, so here is their six hours of work compressed into a little over two minutes. Both cameras were running at 5-second intervals. I had a GoPro Hero close to the shed, and my Canon DLSR with a long lens, on the balcony.

This is essentially the same way as they build houses around here; framing them up with the wooden structure before covering them in barrier cloth and whatever exterior you're using. Houses have concrete slabs underneath with all the plumbing pre-installed, but after that it's very similar.

As I am typing this, it is a few days later and the shed has been Tetrised... everything is jammed in there and needs organising already. It wouldn't be a proper shed without that, now would it?

This is my excuse for not ironing today.

Can I use this excuse every day? 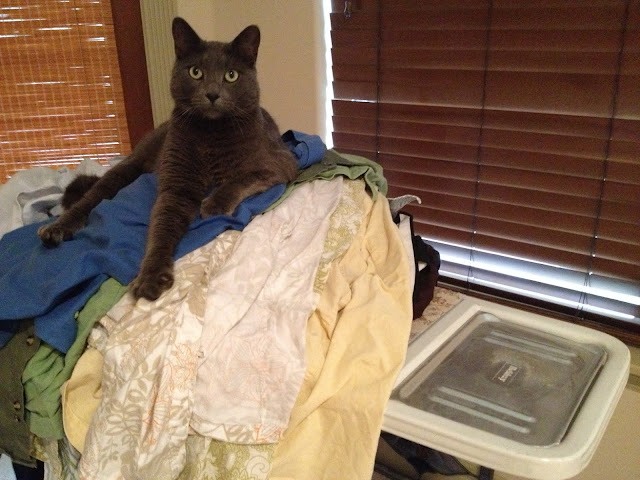 This is Smokey's glass now... 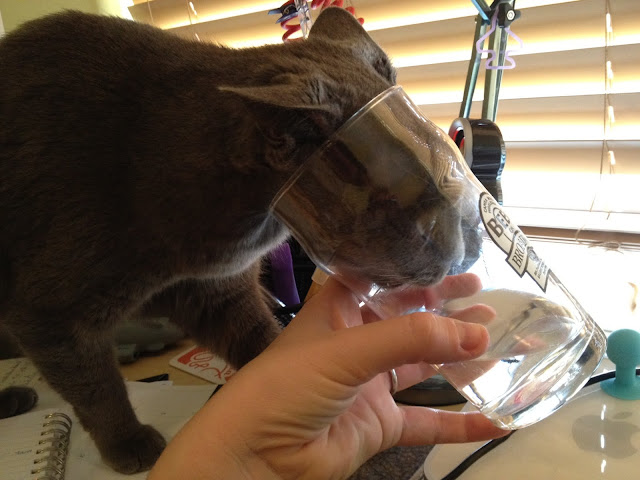 I've been wanting to make a sundial for the last couple of years, and finally got off my butt to do it. First stop was the Internet, which is full of resources for the design and construction of sundials.

It's important to know that a sundial should be built for the location at which it is to be used. The bog standard ones you find for sale in garden centres will rarely be accurate, if ever. So I built mine for the specific latitude and longitude of our back garden here in Buda, Texas.

Here's the glass pattern. The gnomon is in red and will be a separate piece, but is placed on the pattern so I know where to build it onto the piece. I did make some tests with paper in the sun, to make sure it would work before cutting any glass.

If you look carefully, you will notice that it is not symmetrical, and in fact the 12-noon line is left of centre. This is due to the fact that we're not located in the middle of our time zone, but slightly off to one side. There are also various choices to make when designing sundials - putting the noon line dead centre will change things. 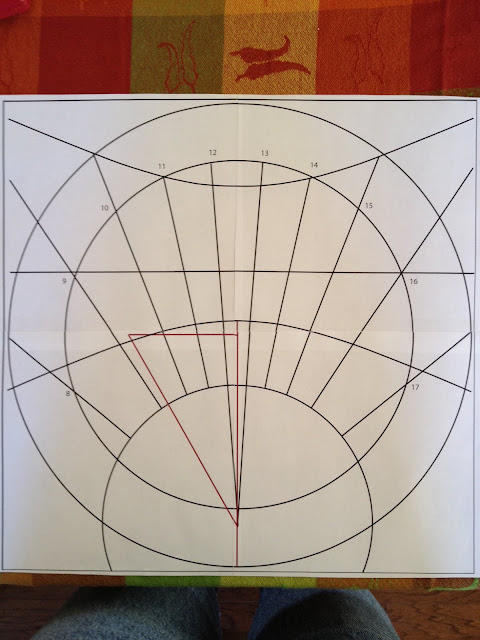 I start cutting glass and adding it to the pattern. I chose lighter coloured glass for the middle, so you can see the shadow better. 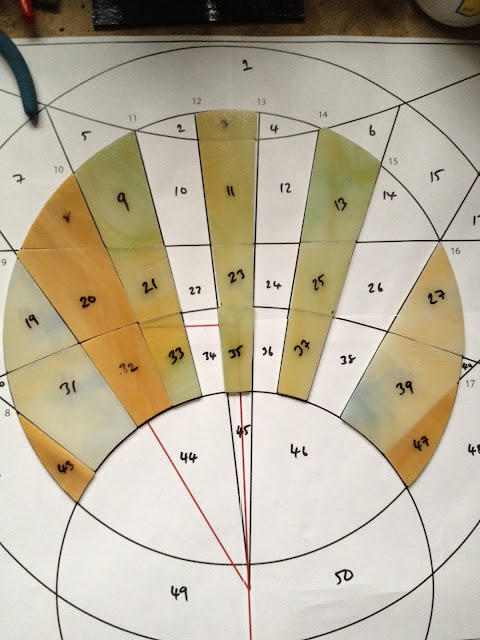 Here, all the glass is cut, and I'm holding the gnomon in place to see what it looks like. I chose the outer edge colours to be darker for contrast with the middle, and also to represent the sun coming up from the earth, past the green plants and into the blue sky, before reversing that journey as it goes down in the evening. 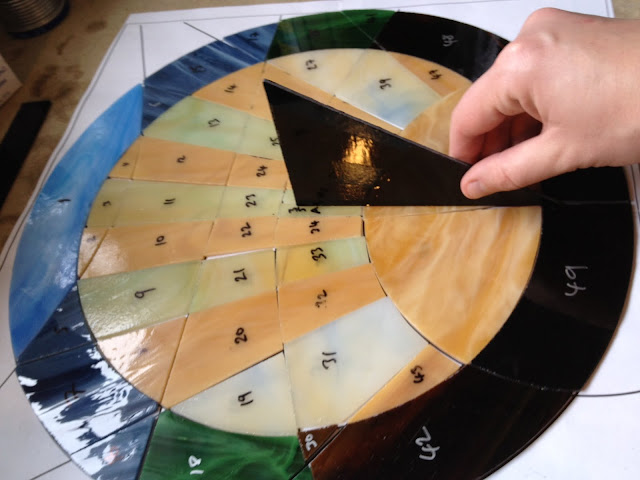 Now I've got all the glass pieces coated in copper foil and pinned to the workboard. It has been tack soldered at this point, so the pins are about to come out before the main soldering starts. Note that I've added some extra foil down the middle, where the gnomon will be attached. 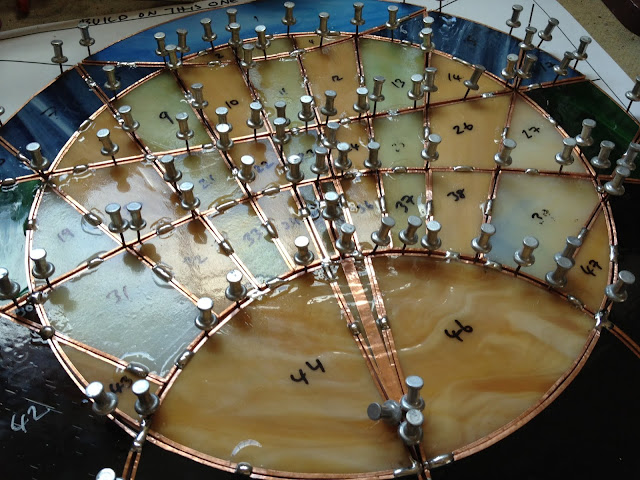 About four hours of soldering later, we have a glass disc. Yay! It is 15 inches in diameter; you can see my hand for scale. 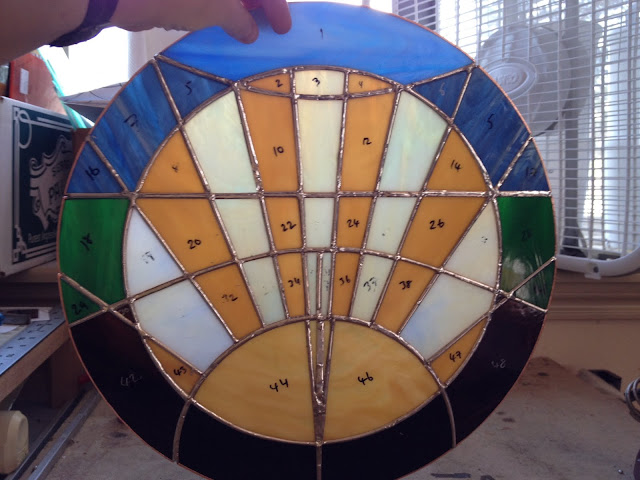 The next step was to attach the gnomon. Straight outside for testing as soon as that's done. It works! It's just about 4pm here. You read the sundial with the longer edge of the top of the gnomon; the shadow should be parallel to the radiant hour lines.

See how the shadow comes to a point just north of the straight, horizontal line? The two lines either side of the horizontal line mark the winter and summer boundaries of where the shadow should fall. The winter line is at the top, and the short summer shadows fall closer to the middle. The very circular line below these is both for decoration and to make the glass hang together better. 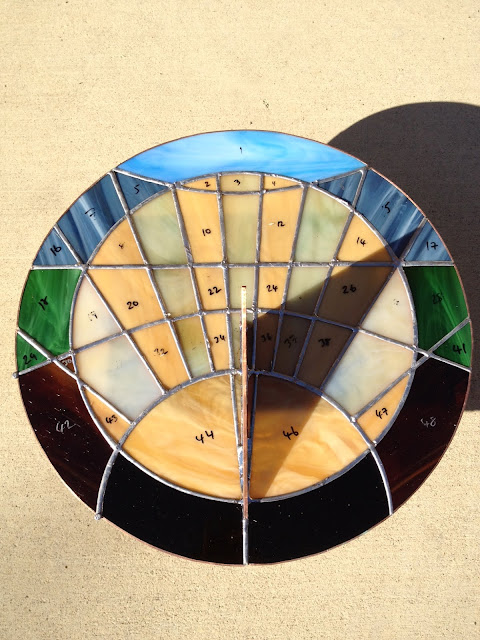 Between that picture and this next one was another couple or three hours of soldering to tidy up the seams and tin all the edges, before wrapping some lead came around the outside to make a stronger edge. Next came the patina, to make the metalwork look dark grey. Then it had to be waxed and polished.

Below is the finished sundial, in the shade of our sunroom (an oxymoron, I know). It is sitting on a plant stand I bought from Home Depot. I attached some tabs to the disc underneath, so it won't slide off. There's also a bunch of felt pads stuck onto the metal ring of the stand, to protect the glass. 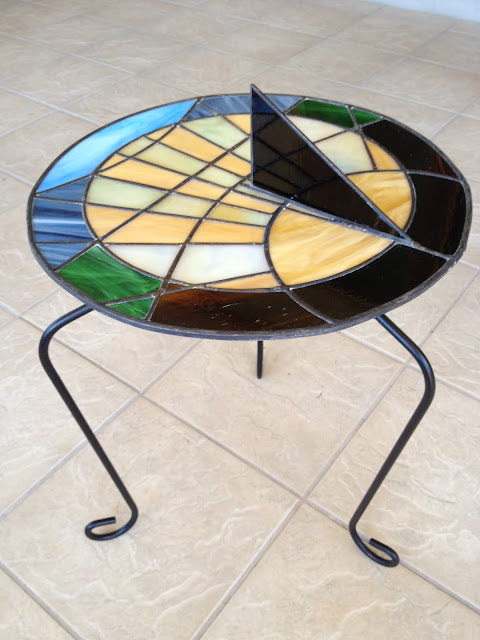 Now it's outside. Remember how the noon line was left of centre? My watch says it's 11:45, and so does the sundial*. 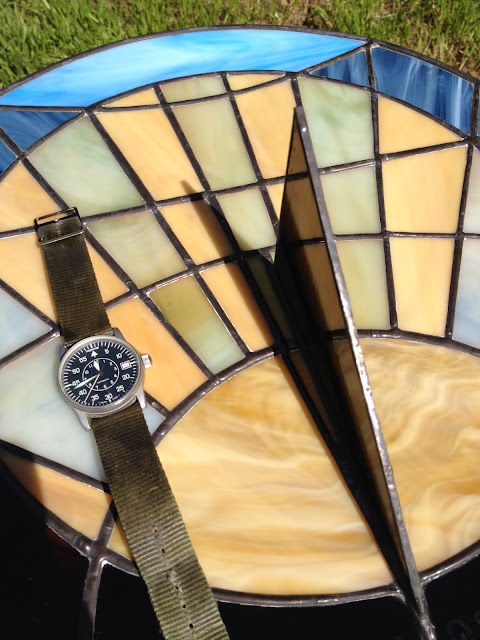 If you look really closely at the edge here, you can see that I do have numbers on the dial. I etched them with stencils and glass etch cream which mostly worked, but they're not very obvious. They show up in certain angles of light. If I did this again, I might try making the numbers in copper foil, or sandblasting them for better visibility. 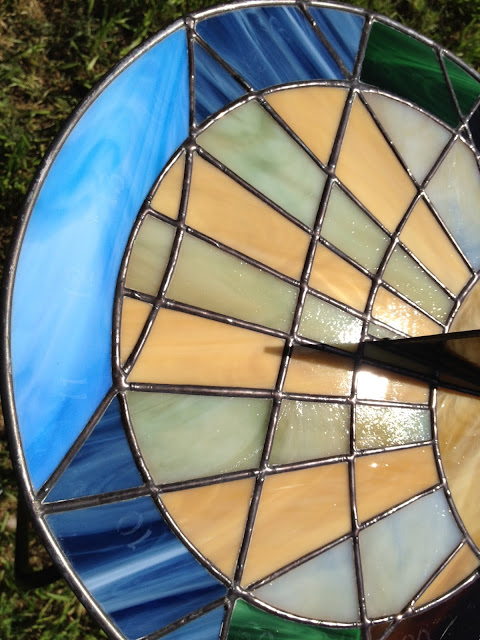 And one last look at the final piece. 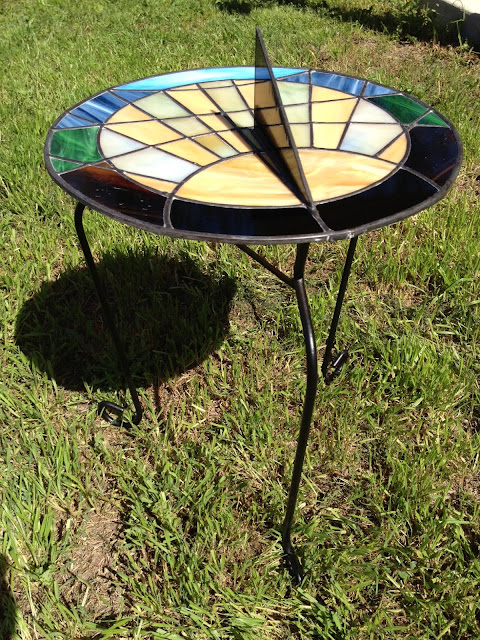 * There's a little bit of licence here. Sundials are only accurate twice a year, due to the Equation of Time, which means they're usually either fast or slow by several minutes, depending on the time of year. So if I line up the dial exactly north-south, which it should be, then it will probably slide away from the time my watch says, by a few minutes. I didn't have a compass on me when I took the picture... that's my excuse ;-)