I just got my drone back in the air after a bit of a hiatus, so what else to do but a quick before and after of the front yard?

Here's what it used to look like, last January. I didn't get quite high enough to show the whole yard but you can see it was not a pretty thing. 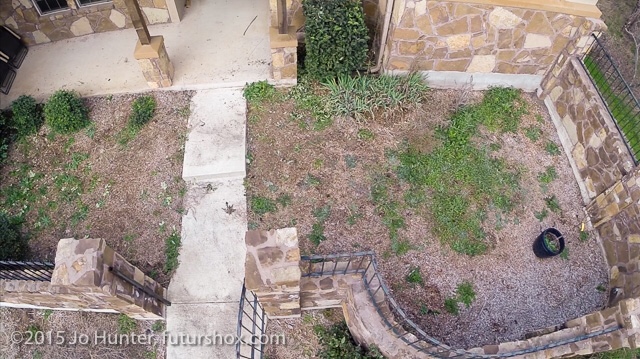 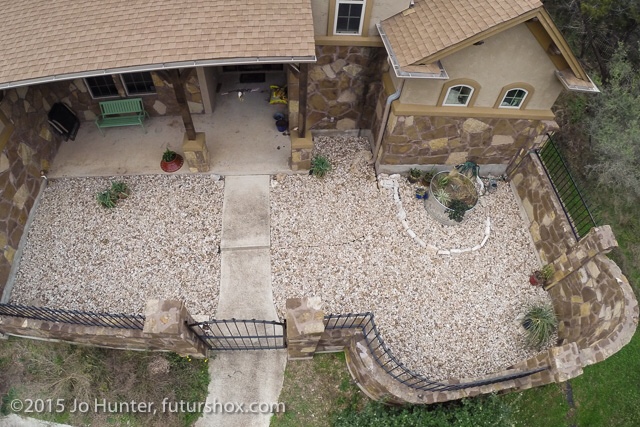 Because it's been far too long since we had a Cat Post. 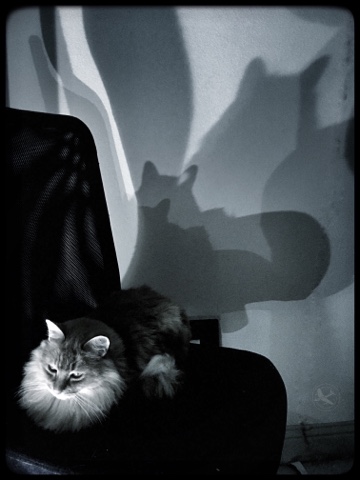 Sunshine in the Sun 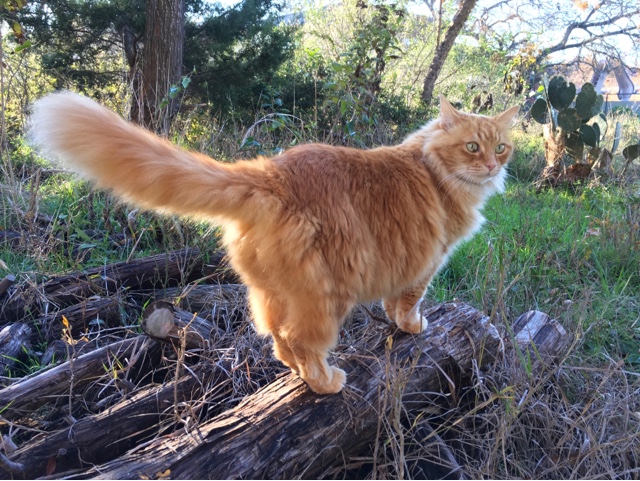 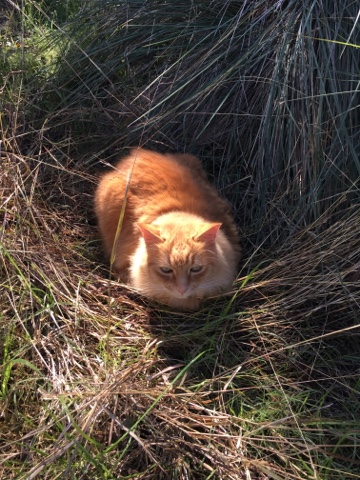 Something interesting is up this tree... 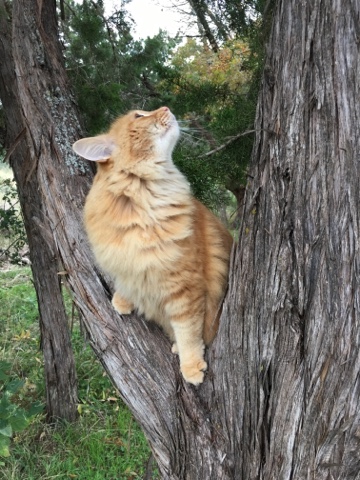 Smokey poses for the camera 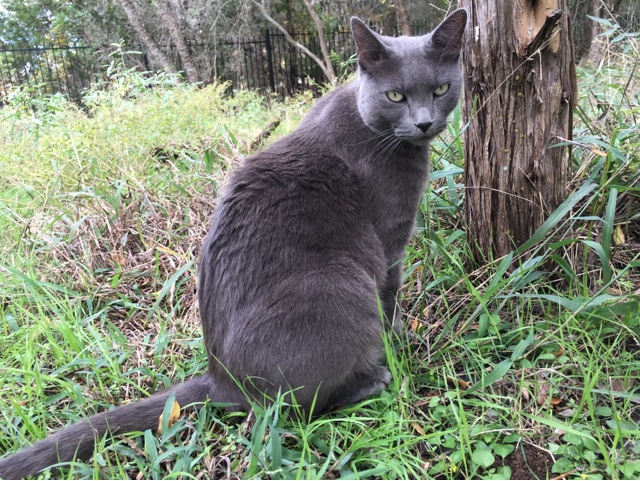 Contemplating bugs in the grass 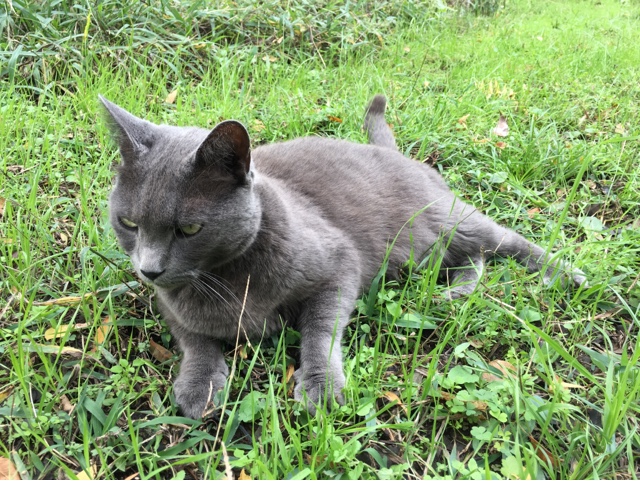 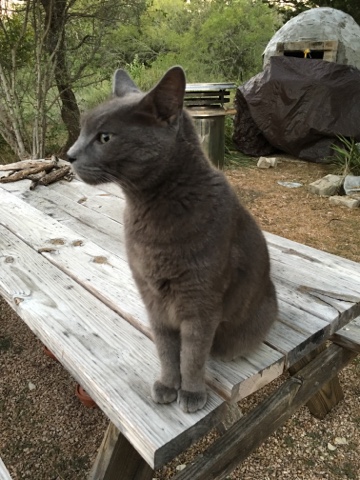 Quality controlling the comfort levels of the bench 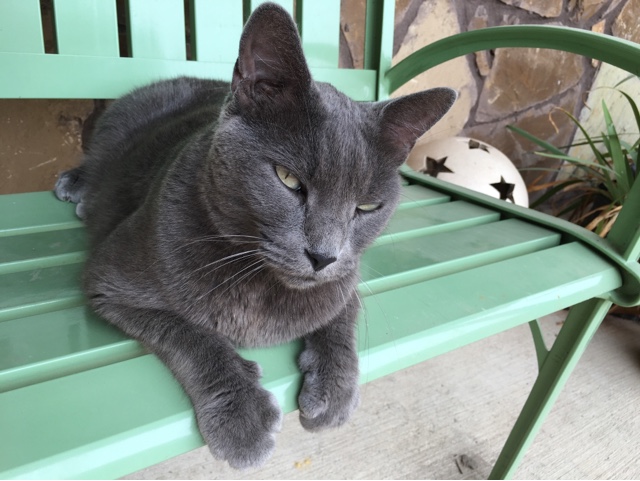 We have an old fire pit that has been kicking around for ages. The lid rusted through so we replaced it with a bigger pit. 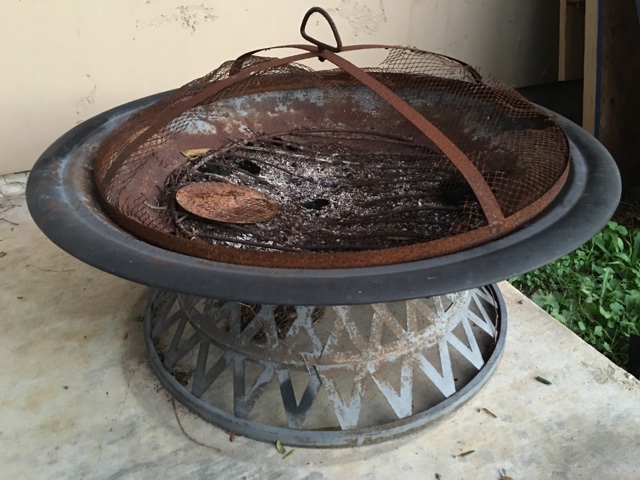 I thought I would clean it up and make a planter out of it. 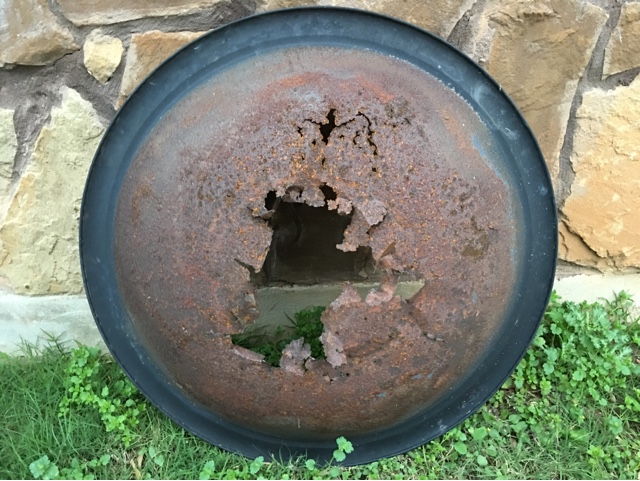 Hm, maybe not. The bowl fell apart as soon as I touched it.

Plan B then; the base was still in good shape, so I took the Percussive Detachment Tool (a hammer) to it and cleaned that up, with steel brushes and sanding. One can of spray paint and a suitably sized terra cotta bowl later, we have This: 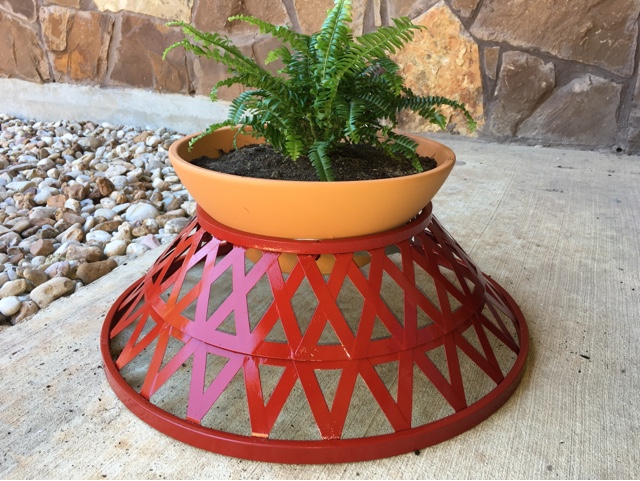 A nice splash of color for the front yard. Not bad, eh?

Of course, it doesn't take long before the tank gets investigated by Cats. 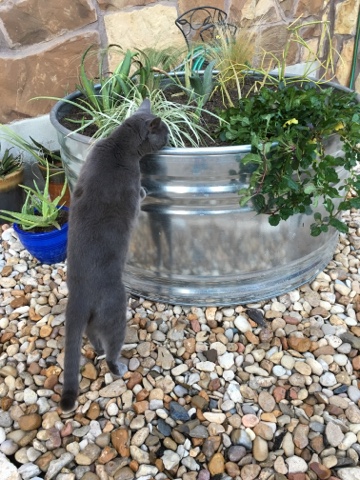 Some of them investigate more closely than others... 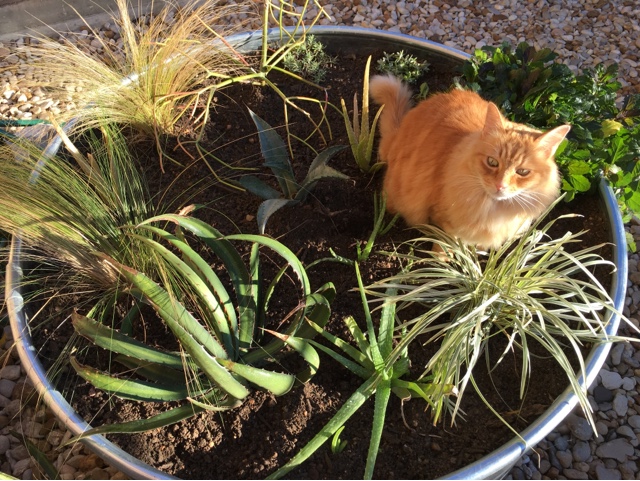 Our neighbors kindly let me borrow their truck, in which I drove into Austin to a splendid shop named Callahan's General Store. This is an excellent agricultural emporium, with everything you could ever need for ranch or farm. Amongst the huge inventory, they sell stock tanks. And stock tanks make for big, cheap(ish), plant pots. They're quite popular around here.

Here is a 4-foot diameter stock tank in the back of the truck. 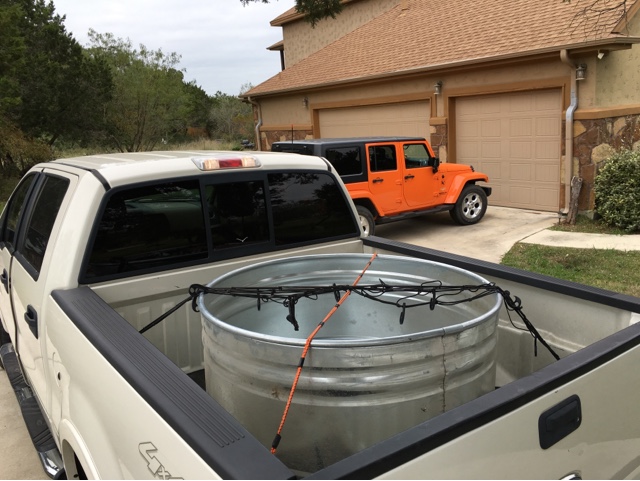 I had Alan drill some holes in the bottom for drainage. Seems a bit strange, turning a perfectly watertight good honest tank into a sieve. But it's necessary. 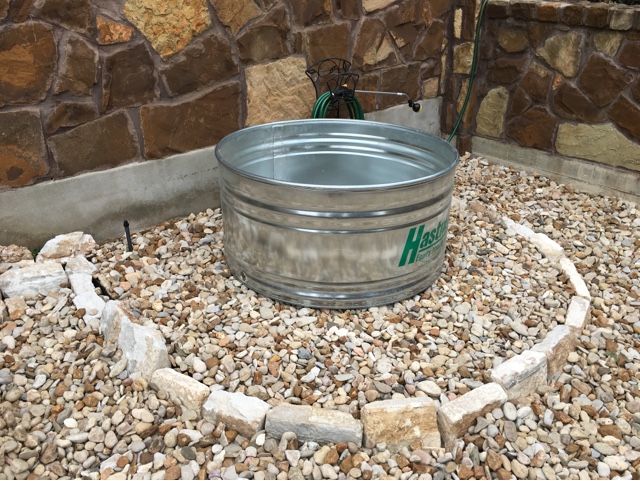 Next I took some of the excess rocks that we had in the courtyard and put them into the bottom; again; for drainage. I also lined the sides and part of the bottom with plastic (actually, bubble wrap, since that's what I had handy) - the tank is galvanized steel - apparently zinc can prevent woody growth in plants so it's best to cover it up. 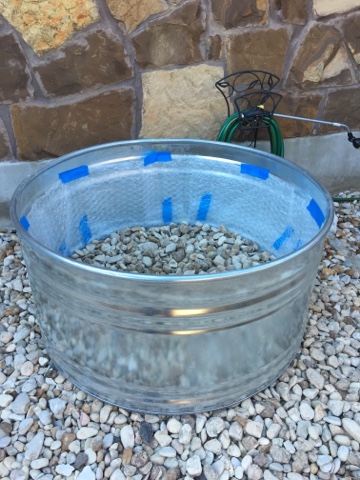 Then it was back to the rock shop again, which also sells various kinds of earth and dirt. I bought half a yard of their Lightening Mix which is part gravel and good for succulents. Next door's truck came in handy again too; here it is being loaded. Unloading it was slower, involving the wheelbarrow, shovel and a hosepipe to wash the truck out afterwards... 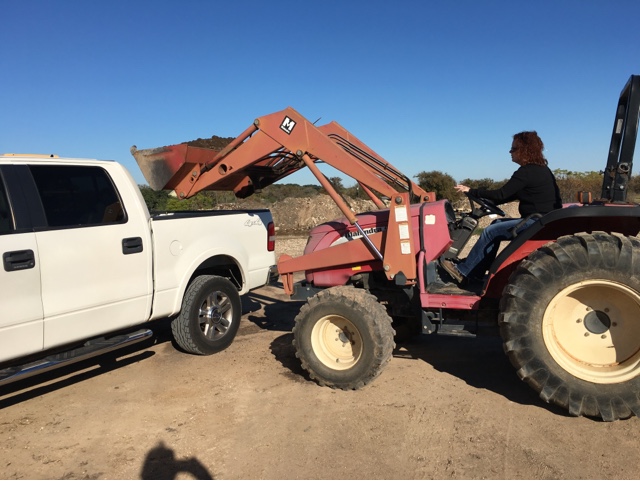 And Lo! We have a tank full of earth. Actually, half a yard wasn't quite enough to fill it. I had to go back and buy eight 5-gallon bucketfuls more earth to get the level I wanted. 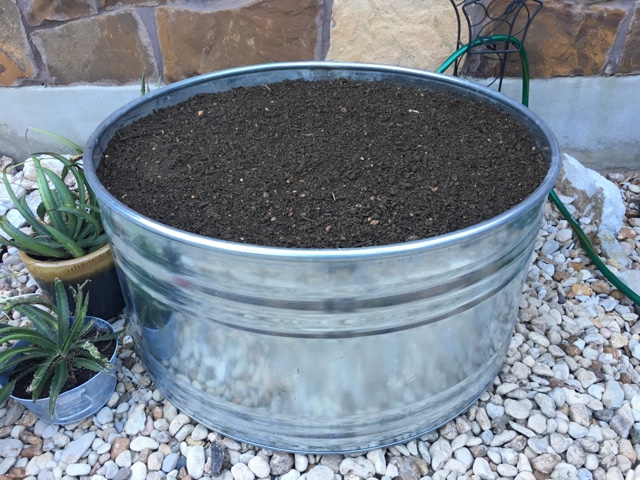 And then it's the exciting part - planting time! Some of the plants I had around the house, waiting for their turn in a bigger pot. I bought the little blue agave that you see in the center. The two wispy Mexican grasses at the back I had already. The twisty yucca at 10-oclock came from a house nearby who was getting rid of it. The pale grass at 8-oclock, the dark green dangler at 6-oclock and the two small blue-ish ones on the right were bought. There's a pencil cactus at 2-oclock, and the rest are Aloe Veras, all of which came from Dee next door.

All together, they make a nice variety of shapes and colors. Now we will see if they survive in this location (part-sun at best) and of course we're heading into winter. Fingers crossed. 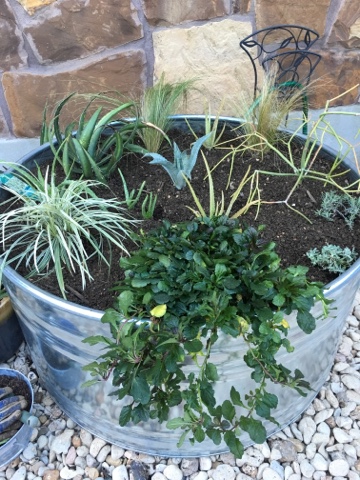 Here's a view of the entire end of the courtyard. In the red pot is a new Inland Sea Oats plant. These make interesting seed pods which rustle in the breeze. None on it yet though; maybe next year.